The Girl Who Could Not Dream

October 25, 2016
When my hold on The Girl Who Could Not Dream by Sarah Beth Durst came in at the library, I picked it up and was immediately put off by the cover. I didn't want to read it. It was nominated for Cybils though so I was going to have to. I'm so glad I did. This book's cover does not do it justice. 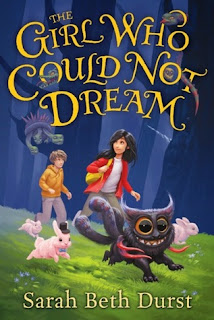 Sophie lives with her parents in a bookshop. She is a lonely girl with no friends because she is different from others around her. Not only can she never dream, her parents are dream distillers. They take other people's dreams and bottle them to sell to other people. They have a secret room where dreams are distilled and labels on shelves. The one time Sophie dares to take a sip just to see what dreaming is like, she brings a monster in her dream back into the real world with her. That's when Sophie learns it is dangerous for her to dream. She goes about her life helping her parents with Monster by her side to protect her. Sophie has a talent for seeing which kids in her school have nightmares. She gives them dream catchers made in her parents' shop. When two of the kids she takes nightmares from go missing, and she just manages to rescue another, Sophie knows that there is trouble. Then her parents go missing and Sophie has to rescue them and save the world from nightmares brought to life.

Sophie's feelings of isolation and like there is no place for her among her peers will resonate with MG readers. Just as many readers will be able to relate to Ethan and the other children who have nightmares. What is excellent about Sophie's journey is that she learns that being different doesn't mean she needs to be alone. Ethan, who was simply curious about why the dream catchers worked so well, stands by Sophie through all of the weird and strange things that are going on. Sophie picks up a few other human friends along the way too. Monster remains Sophie's most stalwart friend though and is definitely my favorite character in the book. Every kid who reads this will probably want their very own Monster.  He is snarky, surly, and fiercely protective of his girl.

The plot is fast faced and full of adventure. The villain, appropriately named Mr. Nightmare, is rather predictable but he achieves exactly the right sort of menace for a book of this nature. Sophie has to harness the power of dreams to be able to stop him. There are twists and several surprises that will have young readers on the edge of their seats. The book is also full of humor, both outrightly funny and subtly subversive. Aside from the main villain there is a mysterious organization (rather like a magical FBI) Sophie and her parents are afraid of though this element was a little too vague to feel like an actual threat.

I want to wholeheartedly endorse the book, but I was concerned about the use of the dream catchers with no mention of their Native roots or the mythology behind them. I think adding just one paragraph of this to the book would have made their use feel more legitimate. As it was, I was a little uncomfortable about it being appropriating.

For kids who like "spooky but not scary" stories and fun magical adventures, this is an excellent choice.