November 14, 2016
I recently took a break from my MG Speculative Fiction reading for the Cybils and chose to read The Season by Jonah Lisa Dyer and Stephen Dyer. This is a book that combines Texas debutantes, soccer, and a splash of Pride and Prejudice. I will admit the book is far from perfect, but I enjoyed every single minute I spent reading it. 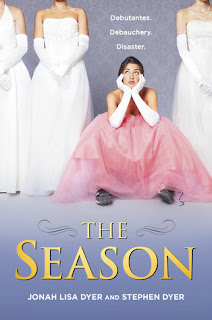 Megan McKnight is a star soccer player who dreams of playing on the National team. Soccer consumes all of her life until the day the newspaper announces the Bluebonnet debutantes have been chosen by the Dallas elite and she is one of them. Megan always knew her twin sister, Julia, and her cousin, Abby, were destined for the Bluebonnet circuit. She thought she was safe. But her mother had other plans and now Megan has to find a way to juggle soccer and classes with tea parties, cultural outings, and balls.

I really liked Megan's voice. She has a subversive snarky sense of humor. Her mouthiness often gets her in trouble, but she is hilarious. When her escort to the first ball tells her he's actively looking for a wife among the debutantes, she responds with,  "I'm just here for the sex." You have to love a girl with that kind of comeback power. Her attitude gets her in trouble too though, and this is part of why her mother insists she go through the Season. As a reader, I felt a great deal of indignation on Megan's behalf, but as Megan begins to try and see things from other's perspectives it was obvious she did need this experience and it helped her grow. At the core of this story are female relationships of all sorts. Megan and her sister Julia share a strong bond and there's not much Megan won't do for Julia. The relationships Megan has with the other debutantes change and grow as the book progresses too. We don't see as much of this, and the one "mean girl" doesn't get much development or sympathy, but what we do see of Megan with the other girls is good stuff (particularly at the end). The relationship between Megan and her mother is important as well. They both learn to see new things and appreciate different things about each other.

Megan's suddenly dramatically busy life is made further chaotic by the men she meets. She first encounters Andrew, a Harvard graduate Yankee business man who seems to find her sense of humor and chaotic existence amusing. When she hears him insulting her during the first ball, her opinion of him drastically changes. Megan then meets Hank, a sexy, charmingly flirtatious Texas boy who has big plans for her family's land that could solve their financial problems and help keep them from selling to a fracking company. Anyone who has read Pride and Prejudice will see where the story with these two is going immediately. That is a bit of a problem because I felt like the authors relied on that a lot to make Andrew a feasible romantic option for Megan. A lot of my desire for them to get together was knowing he was Darcy and not because there was a lot of great chemistry or development between them on the page. Andrew is a really great guy, but their storyline needed a little more developing. I sill enjoyed watching them get there though.

The Season is a hard book to pin an age category on. It's being marketed as YA and is published by Viking Children's. It's not really YA though. Megan is in college and of legal drinking age. All of the guys in the novel are men with careers and businesses. Megan is navigating a very adult world. It makes it a hard book for me personally to recommend to the teen readers I personally work with. For some teen readers it will be exactly what they are looking for. Teen me would have made this her favorite book and read it a million times.