November 21, 2016
This is next week's Top Ten Tuesday topic, but it inspired me to do a bigger one. I haven't made one in a couple of years and so will feature books published in the past several years but the categories are inspired by my favorites from this year. I've added a "tried and true" recommendation for each category that is a bit older. These are books I've recommended over and over with success.

I by no means intend to be reductive with the categories. No child fits just one and the books could all straddle several as well. It is just meant to be a guide. Links are to my reviews. Feel free to comment, email, or tweet at me if you have questions about any particular book.

For the Introspective Kid

For the Kid Who Loves Adventure

The Blackthorn Key by Kevin Sands (historical fiction; 2015)
Jinx's Fire by Sage Blackwood (fantasy; 2014; third in trilogy that makes a great gift together; all out in paperback)

For Kids Who Enjoy Mystery and Intrigue 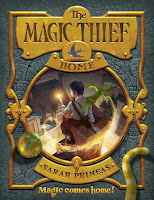 The Magic Thief: Home by Sarah Prineas (fantasy; 2014; fourth in a series that makes a great gift together; all out in paperback)

Two Naomis by by Olugbemisola Rhuday-Perkovich and Audrey Vernick
A Nearer Moon by Melanie Crowder (fantasy; 2015)

My Year of Epic Rock by Andrea Pyros (contemporary realistic; 2014)

Dr. Fell and the Playground of Doom by David Neilsen (fantasy; 2016)
The Jumbies by Tracey Baptiste (fantasy; 2015)

Cuckoo Song by Frances Hardinge (fantasy; 2015)
The Hollow Boy by Jonathan Stroud (fantasy; 2015; 3rd in a series; great to buy in a set)

Remember, feel free to ask me questions or do to a more customized recommendation list for your kid!

Kim Aippersbach said…
Hmmm, you've reminded me of a host of books I've been meaning to read this year. I'm so behind on my TBR, particularly with middle-grade. Must get my hands on some of these!
November 21, 2016 at 4:36 PM

Brandy said…
It seemed like it would be so easy when I got the idea, then took a looonnnggg time. I'm glad people appreciate it!
November 23, 2016 at 4:30 PM

Anonymous said…
You may notice me not putting up a gift guide list. I may also just have spent almost an hour looking at other people's lists, just to see if I could muster up the time and energy to put one together. Hats off to you - I know it's a heck of a lot of work.
November 29, 2016 at 5:52 PM