January 12, 2017
I always feel bad for books that come out in November/December. They often get lost in the shuffle as Best of Year lists are made at this time and many are too busy to read new books. If you're not paying attention, it is easy to miss these books entirely.  The Friendship Experiment by Erin Teagan is one such book. It is delightful and one of those books that naturally attracts middle grade readers yet I haven't seen many people mention it. 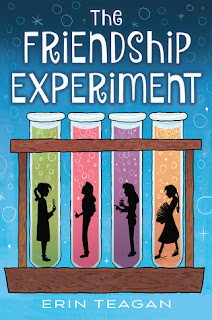 Madeline is dealing with a lot right now for one sixth grader. Her beloved grandfather just died. She is about to start middle school without her best friend by her side. She has a rare blood disorder that causes unpredictable nosebleeds that are difficult to stop. There is a new girl who experienced Maddie's dream of going to Space Camp and won't stop talking about it. Then there is her popular cheerleader older sister and her parents who don't seem to understand how her world is crashing down around her. In order to cope, Madeline begins writing SOPs in her science journal. Operating Procedures on how to avoid people who annoy you and how to survive losing your best friend are nice things to have in your head, but soon discovers the dangers of writing all the things you keep inside your head down on paper as her life spins even more out of her control.

The Friendship Experiment is told in Madeline's first person point of view and being in her head is wonderful. She is a fully realized very human character. She is a little neurotic, compulsive, and anxious. She is incredibly smart and wants to be a scientist more than anythings. She swabs things and grows super gross bacteria in her bedroom. Her greatest flaw (and it is great) is her carelessness with other people's feelings. Part of what makes Madeline's voice so authentic is how wrapped up in her self she is and how she sees everyone as an extension of herself. They matter in how they relate to her and not as individuals, which is text book middle schooler. The power in the book is how Maddie grows, changes, and learns over the course of the story.

All of Madeline's relationships are important and this is a book where the plot is entirely driven by character relationships and interactions. Yes, a lot of things happen and it is a fast paced read because of this, but those things revolve around people. It is a short book at 241 pages and yet Teagen did an amazing job at developing so many relationships and showing their impact on Maddie's existence and her impact on their lives. Grandparents, parents, siblings, friends, acquaintance-all of these relationships are explored and it is done with heart, humor, and insight. I particularly appreciate how chock-full of nerdy science girls this book is, and how it showcases everyone is a little weird about something. I also liked how none of those nerdy science girls were reduced to stereotypes. They all are different and have multiple things going on.

The Friendship Experiment is a fairly typical MG school/friend story, but it is one that excels at what it is trying to do and I think will have wide appeal to kids who love those sorts of stories.