Murder, Magic, and What We Wore

January 17, 2018
Regency Era. Spy Games. Magic. Fashion. If the title and cover of Murder, Magic, and What We Wore by Kelly Jones were not enough to snare me, those word would seal the deal. As soon as I found out this book existed (which was later than I'm comfortable with), I wanted to read it. It isn't a perfect book, and I have some quibbles, but the bottom line is this book is just delightful. 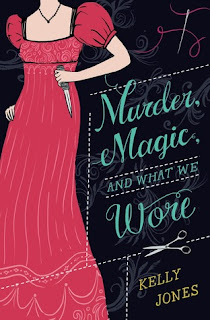 Annis discovers her father is dead and that she and her aunt are nearly penniless. They must seek genteel employment, but Annis does not wish to be a lady's companion or governess. When she discovers that her talent with alterations is more than a talent with needle and thread, but the magical ability to sew glamours, Annis decides she will make their fortune selling glamoured gowns. With her maid Millie at her side, Annis sets out to convince her Aunt Cassia she is capable of succeeding. Cassia reluctantly agrees to give her a chance. Annis is relieved because she needs to prove herself to more than just her aunt. Annis knows her father was murdered because he was a spy for the British in France. When she stumbles on to incriminating documents he left behind, Annis works to convince the War Office to take her on as well. They are less than impressed with her, but that doesn't stop Annis from continuing to try. Soon Annis has her hands full making gowns, masquerading as a French dressmaker, dodging dangerous operatives, and managing a social life. Fortunately she has all the help she could want from Millie. Both girls soon discover the power they have when they work together, and the rest of the world had better watch out.

Murder, Magic, and What We Wore is told in first person from Annis's point of view. Annis is smart and competent, but also naive and rash. She does several reckless, thoughtless things, but she has a determination and spark for life that make her irresistible as a heroine. All of the things she does that appear reckless and thoughtless can be explained by her age and generally sheltered life. Annis's determination and back bone are her greatest strengths. Her Aunt Cassia is no wilting flower, easily manipulated, or turned from her purpose without a great deal of effort. Annis has learned her strength from her aunt and earned her steel through years of dealing with her. When the time comes for Annis to decide what she wants from life, nothing is going to stand in her way. If she has to make it happen through sheer force of will, that's what she will do. She makes mistakes and missteps, learns from them, and moves on to the next challenge. Her voice is full of wit and sarcasm, but is also vulnerable in many ways. Annis can't get where she need to alone though. Millie is the perfect foil for Annis. Calm, collected, practical, and with more world experience. She is the most newly hired maid in the household and the one who stays to stand with Annis and Cassia as they lose almost everything. Not that she has much of a choice, but she makes the best of her situation. She sees great potential in Annis and together the girls work to make their visions of the future a reality. They are a true team, and Millie is as much the heroine of the story as Annis is. I love books that celebrate and hold up female friendships. This one does a  beautiful job with that. Annis and Millie are incredibly different and from separate worlds, but they are bonded by their purpose, experiences, and sympathies for each other. There is a cast of other great female secondary characters as well (including Aunt Cassia who is AMAZING and should have a whole book written about just her).

The world of the novel is Regency England but with magic. There are people who can sew glamours, sing enchantments, paint illusions, etc. It is post Napoleonic Wars, and Napoleon is in his exile on St. Helena. The plot revolves around this fact, a possible traitor, French plots, and sunken ships. Annis is attempting to investigate all this while starting her dress shop. Unfortunately being as young and inexperienced as she is, she is found out rather quickly and finds herself in a race against the murder she is trying to unmask. Her and Millie have to decide who to trust and who to tell what. Can Annis trust her father's man of business Mr. Harrington? How much can Aunt Cassia know? Who among the other member's of society can Annis turn to? The plot moves quickly. The mystery is interesting, if easy to figure out. (Nothing about the reveals in this novel surprised me, but that didn't make it any less fun for me to read.)

My favorite thing was definitely how much this book celebrated women and their friendships. There is no romance (though there is a small hint for a potential one in Annis's future). I know teens who are looking for fantasy adventures, but are a little tired of the focus on romance. This is the  perfect book for them.

I was hoping to discover that this is the first in a series, because I would love to read more. I haven't found any indication that it is, but I will live in hope.