January 11, 2018
I enjoyed Ghost, the first book in Jason Reynolds' series about the new kids on an elite track team. It was excellent just as everything published so far by Reynolds has been. In 2017 I made his YA book my priority because I do tend to love his YA works slightly more. As a result, reading Patina got pushed into the start of 2018. I hate that I waited, but also I'm happy to start of a new year of reading on such a high note. This book is fabulous. 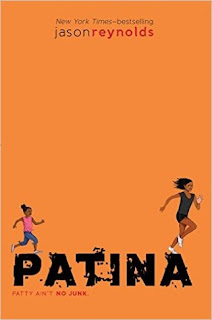 Patty is always running even off the truck. She runs from one thing to another as she tries to do all and be all to the people around her. She has to help take care of her sister because she always has, even though now they live with their aunt and uncle who are wonderful. She has to help take care of mom, because her mom lost both of her legs to diabetes. She has a group project at school and is doing all the work because someone has to. She has to win at her track meets because she ain't no junk, and that's what she's supposed to do. Win. Over a week when life blows up for her more ways than one, Patty learns a lot about community, relying on other people, and exactly what's most important.

One thing Jason Reynolds always excels at is voice. This is, I believe, the first time he's tackled a female narrator though. He got it right here too. One thing I'm appreciating about this series now there are two books out is also how much Reynolds is getting the middle school voice. Ghost was exactly the right combination of impulsive, aggressive, and skeptical. Patty is the right combination of attitude, superiority, and cynicism. Both are exactly as self-centered as middle schoolers often are in that they often don't see past their own noses. Everything is about them. These kids embody all the reasons people say they don't enjoy hanging out with or teaching middle schoolers. (And all the reasons I LOVE to do both of those.) The thing about middle schoolers is, with the right sort of guidance, that's when they start learning how to be not only themselves but part of a wider community too. Patty is struggling with a lot. Though she is loved (and knows it) and well cared for, her father is dead and her mother is gravely ill. Her aunt and uncle are wonderful, but this girl has experienced trauma and it shows. She has started a new fancy school where she is a black girl surrounded by white people-people have far more wealth than the people in her previous school. She is trying to figure out how and where to fit into that. She is one of the new kids on the Defenders and has just been chosen to race with some of the veterans on the 800 relay. She has put a lot of expectations on herself, and she refuses to accept failure of any kind-even if it isn't really failure and coming in second rather than first in a race.

The book begins at the first track meet where Patty comes in second and is none to happy about it. Then follows a week that would wear any person down. I really enjoyed what Reynolds did with the plotting here. This is a character focused work. We follow Patty through an incredibly stressful and intense week. There isn't any one major thing. It's all the vagaries of life we experience from one day to the next with the sudden unexpected punches that seem to come at the worst times. We live Patty's life with her  as she learns to appreciate the people around her in new ways through it all at home, at school, and at the track. The way Reynolds pulled it all together and packed every day life full of so much meaning and intensity in so few pages is really quite extraordinary.

Can I also say that I really like the way Reynolds is ending these so far? I won't go too much into the whys of that because spoilers. Suffice it to say that I think it's super clever and meaningful in so many ways.

This series is a must read for any kids who enjoy realistic stories featuring school, friends, and family. No other series comes close to touching all of these things as well and realistically as this one does. Even better, you don't necessarily have to read them in order. All told there will be four books, each featuring one of the newbies on the track team. The new one up is Sunny. His book releases April 10, 2018.