From Twinkle, with Love

January 25, 2019
With her second book,  From Twinkle, with Love, Sandhya Menon has solidified herself as one of my must read authors. Not only did I feel her sophomore novel lived up to the hype and accolades of When Dimple Met Rishi, I actually liked it a little bit more. 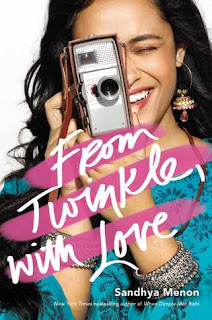 Twinkle Mehra is tired of her life as a groundling. Her best friend Maddie has moved on to better and more popular friends, and Twinkle knows it's just a matter of time before she's left behind for good. Her years long unrequited crush on Neil Roy seems destined to remain forever unrequited even though Twinkle KNOWS they could be the best high school power couple ever. When Niel's twin brother Sahil offers to produce a film Twinkle would direct and film for their upcoming school festival, Twinkle sees a once in a lifetime chance to show everyone who she is. And if that happens to mean getting her best friend back and  winning the boy of her dreams at the same time so much the better! Except she quickly starts developing complicated feelings for a different boy who may be even better than her dreams, but life is complicated, and Twinkle is about to discover how much.

The book is told mostly in the form of Twinkle's journal which she writes as letters to her favorite female directors. It is interspersed occasionally with emails and text conversations between various characters. At its heart, it is epistolatory, which I love. The format could have come across as contrived, but it really works for Twinkle's voice. Her passion for film, her hurt over Maddie's defection to the popular crowd, and her confusion over her growing feelings for Sahil come across as genuine and heartfelt. I really felt like I knew Twinkle in every aspect by the end of the book. One thing I've appreciated about both Menon's novels so far is her ability to let teens be teens. I love that her characters are unsure, but think they aren't until there's no escaping it. I love that they make mistakes because of their impulsivity and emotions. I love the complexities in their relationships. Twinkle is a flawed character who makes some poor choices, but that makes her this very real girl I could picture sitting in one of my classes or hanging out at my house with my daughter. I also love how flawed the heroes of the book are. They are good guys. Genuinely good guys. But they're still teenage human ones. Sahil has a lot of insecurities that cause him to lash out and make poor choices too. What is most important is how they learn and grow and make amends for what they do. Twinkle and Sahil are a great couple with an arc that was both fun to follow but also realistic in its vulnerabilities and pitfalls.

The friendship aspect of this story is equally as important as the romantic aspect. Twinkle, like most teenagers, doesn't see herself clearly in relation to others at all. Neither do any of the others and this is where Menon's realism is particularly strong. Twinkle's best friend has recently become part of a new, more popular group of friends. Maddie doesn't spend as much time with Twinkle as she used to, and Twinkle is hurt by this as well as the feeling that Hannah and the rest of the girls Maddie hangs out with finds her less. Hannah could have been noting more than a stereotypical mean girl but she wasn't. Maddie could have been a shallow girl who just dropped Twinkle and moved on. She wasn't. All the girls that make up the group Maddie hangs out with now have individual personalities and nothing about their relationships is simple. Twinkle's discovery of this and what she learns about herself as a result is a journey we don't see typically in YA novels of this type. I also thoroughly enjoyed the interactions between the guys in the group. Sahil and his friends were great, as were the two extra male friends they pick up as the story progresses. Menon has a real talent for character creation, and I want to read more about all of these people now.

It is easy from the synopsis where the main plot of the story is going, but the joy in this book is taking that journey with Twinkle herself through all of her ups and downs, joys and confusions.