The Girl with the Dragon Heart

January 03, 2019
The Girl with the Dragon Heart by Stephanie Burgis is her brilliant follow-up to The Dragon with a Chocolate Heart. While this book could be read independently, I think it would be better read following the first book. If you haven't read it yet, you have two exciting and excellent books to look forward to! I, of course, may be biased as these books contain all my favorite things.

But there's one other truth I know for sure: if you have the courage to tell your own story, you can remake the world. 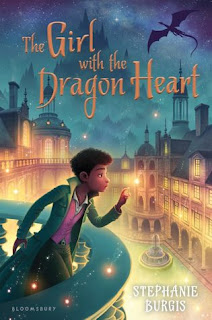 If there is one thing Silke knows she is good at, it is spinning tales. She can make an exciting story out of pretty much anything, and if she happens to stretch or alter the truth to make it just a tad more interesting, what is the harm really? Silke is trying her hardest to bring customers into The Chocolate Heart after all, a chocolate establishment that deserves everyone's patronage. Silke works there as a waitress too as well as helping her brother in his market stall. Silke wants most to protect all of the people she cares for most. She is not losing anyone else. When her tales and antics capture the attention of the savvy Princess Katrin, Silke finds herself offered the adventure and position of a lifetime. However, spying on the newly arrived Fairy court who want to bargain with the royal family is not a simple task, especially when Silke's own priorities for spying on the fairies may interfere with the job the princess have given her. If there is one thing Silke is certain of, it is that you can not trust the Fairies.

Silke as a character was fascinating in The Dragon with a Chocolate Heart. In her own story, she becomes even more so. Silke is one of those people who goes full throttle toward what they want. Once she is convinced she is in the right, there is no stopping her. This makes her relationships with others difficult at times as the people she is closest too wish she would slow down and listen more. Her prickly personality (put in place as protection) makes it hard for people to get to know her, but once she considers you part of her inner circle, her loyalty is ride or die fierce. She grew a lot over the course of her story as she came to see the importance of listening to others, understanding all of the pertinent details of a situation before jumping in, and not rushing head long into a situation with no plan. Her intelligent mind and ability to tell stories are what save her and the people she loves most in the end. It was fun revisiting so many characters from the first novel too. It was interesting to see Aventurine from Silke's perspective. (That is an aspect of these novels that is really well done: how the girls see themselves vs how each sees the other and the uniqueness of their voices.) Both of the princesses have a large part in Silke's story. I find myself fascinated by both of them and would love to read stories about them as well.

Burgis expands the world she created in The Dragon with a Chocolate Heart. It feels like an actual, real place with history and depth. The story of the Fairies and how they operate is based on old fairy lore but is adapted to fit the story Burgis is telling. I found the way she combined the history of the Fairies and the Dragons to be unique and interesting. The Fairies are manipulative, cold, and ruthless, and their mannerisms fit perfectly in the world Burgis has created for her other creatures and characters.

The Girl with the Dragon Heart explores the theme of independence and community, the tension between the two, and how both are necessary for a complete life. I also loved the exploration of the importance of found/chosen family, but also loving and living with the family you are born into.

Jenna @ Falling Letters said…
Ooh, I didn't realize there are fairies in this book! Now I"m looking forward to it even more.
January 6, 2019 at 7:29 PM

Brandy said…
Yes! I love a good story about amoral fairies and Stephanie Burgis is really good at it.
January 18, 2019 at 4:05 PM