August 21, 2019
I LOVE Much Ado About Nothing. LOVE. LOVE. LOVE. That is 100% due to Beatrice and Benedick being one of my all time OTPs. (I've written about them before here and here.) There are parts of the story I would, of course, like to change for a more modern sensibility (such as everything with Hero and Claudio). I am therefore completely and irrevocably in love with McKelle George's clever retelling Speak Easy, Speak Love. She fixed everything I wanted fixed, and gave me things I never dreamed I wanted from the story but now can't live without. 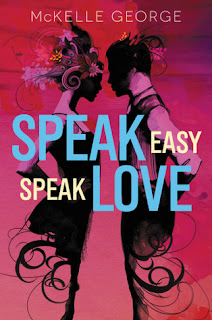 Benedick Scott is finished. He is saying good-bye to his old, privileged life and taking off to live the remainder of his days at the "boarding house" Hey Nonny Nonny! While making his escape to meet his friend Prince, a schoolmate named Claude  catches Ben leaving and tags along only to find himself completely captivated by Hey Nonny Nonny's young mistress Hero Stahr. Ben is unsurprised as he seems to be the only male he knows immune to Hero's charms. But Ben has another surprise waiting for him in Hey Nonny Nonny's newest full-time resident. Hero's cousin Beatrice has come to live with them. She is a freight train and a tornado wrapped up in human girl form, and she knocks Benedick completely off his feet.

Beatrice Clark has dreams and ambitions that do not involve rich boys slumming it on their whimsy. She is going to be a doctor. Just as soon as she straightens out her financial and educational standings. Helping out at her family's "boarding house" that fronts as one of Long Island's most famous speak easies in the meantime just seems logical. They need help, and as capable as she is practical, she can provide help in abundance. Too bad most of her help puts her in the company of the one person in the household she would most like to avoid...

George's versions of Beatrice and Benedick are just top notch. It never would have occurred to me to take Benedick and turn him into a wannabe novelist who has a love affair with his (named-feminine, of course) typewriter, but it is just so perfect in every way. It takes all of his philosophical insecure ramblings and gives them a purpose and a psychology that absolutely fits the original intent of the character and the 1920s setting of this iteration perfectly. Beatrice is as ever highly capable and painfully honest. She is a practical girl who yearns to go to medical school and be a doctor. Following  her ambitions has lead her to learn a great deal on her own already. She lugs around a trunk full of medical study materials and diagnoses everyone she comes in contact with who seems remotely suffering from an unknown ailment. When he meets her, Ben is feeling rather purposeless even though he's trying to invest his life with meaning by running away from his rich father to be a writer.  For her part, Beatrice is trying to find her place in a world that doesn't seem to want her and is simply grateful to her uncle for taking her in. Sparks fly between the two immediately and the banter is wonderful and clever and amusing in every way the banter between these two is supposed to be. Though a few choice lines from the source material are used, George adds her own spin to their dynamic and makes their banter relevant to the setting. I would have kept turning pages just to keep reading their back and forth.

The supporting characters that round out the cast are also well done, and it is here that George changed things up a bit. John is not the unscrupulous villain of the source material, and the fraught relationship between him and Pedro (Prince) is explored in more depth. Maggie (Margaret) has a far more prominent role and is not the hapless dupe she was in the original. The sub-plot of her relationship with John is my second favorite part of this novel. I would love to read another book just about them. Claude isn't much changed from Claudio except he is very much put in his proper place by the end. Hero is far more rounded a character. George spends a considerable amount of time focusing on how the absence of Hero's recently deceased mother has affected everyone. Anna is almost as much a character as all the living characters of the story. There is much acknowledgment that things with Hero would go much differently if her mother were still alive. Prince is the secondary character I feel the least amount of connection to, but I was very content with the way his story concluded in this version. I thoroughly loved what George did with the magistrate characters. The addition of Ben's father as a character is a stroke of genius. (Also I loved him. I could read more of him too please.)

The 1920s setting is inspired. Bringing all of these characters together for the purpose of running a speak easy is a brilliant twist. Prince is the one who does the majority of the smuggling as Leo grieves the death of his wife. Hero is determined to keep it all going and runs the place. Maggie is the singer. Ben just tries to help without getting in the way. John is an Italian mobster trying to protect his little brother from getting in too deep in a world that could kill him. Beatrice ends up there because she's related, but she fits in right away and begins helping without batting an eye.

I can't in anyway pretend objectivity with this. It is exactly so much a me book that I was bound to love it no matter what. The banter lives up to its predecessor, the dynamic between Beatrice and Ben is perfect in every way, the setting pleased me, and I loved every single character.

My only regret is that I waited this long to read it.

Anonymous said…
Have you ever seen Nothing Much To Do on youtube? Its a webseries for Much ado about nothing.
August 21, 2019 at 1:15 AM