The Field Guide to the North American Teeanager

August 05, 2019
The Field Guide to the North American Teenager by Ben Philippe is a book I picked up on a whim at the bookstore when it first came out. I liked the cover. I thought it had an engaging premise. I went into it with a healthy does of trepidation because the execution could have gone so terribly wrong. Fortunately, Philippe is an excellent character writer, and I thoroughly enjoyed my time spent reading about Norris's adventures in Texas and high school. 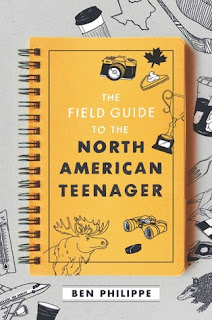 High school junior Norris Kaplan's life is ruined by his mother when she takes a job that requires them to leave the only home he has ever known in Montreal, Quebec. Moving is always hard, but Norris knows for him it will be harder than it's ever been for anyone else. Norris is moving to Texas. He will be a Canadian living in Texas. Not just a Canadian. A French Canadian who speaks fluent French. And not just your average run-of-the-mill French Canadian. A black son of Haitian immigrant parents French Canadian. If Norris has learned one thing from movies, it's that Texas is gong to hate his black French speaking hockey-is-better-than-footbal immigrant self. His plan is to fly under the radar while counting down the days until he can fly north again. But flying under the radar isn't so easy. First Norris needs a job for airfare to go to Whistler for Spring Break. Then he has to make a pact with a cheerleader for assistance in getting the girl he wants to date. Then he ends up in a strange interaction that has him teaching someone to ice skate. That snowballs into captaining a hockey team. Before he knows it, Norris is living a full life in Austin, Texas. However, when a series of bad choices puts at risk everything Norris has built in his new home, he has to choose whether to run back to what is familiar or stick it out.

Norris is pretty obnoxious. He is a likable obnoxious though. Philippe manage to walk the fine line of making him empathetic while also highlighting his selfishness and stubbornness. I have particular empathy as I moved from New York to North Carolina as a junior in high school and was equally unhappy about it and met every new thing with scathing quips about its inferiority. So I get Norris, but I also recognize exactly how stubbornly selfish he's being. It's a sort of self-sabotage that comes with immaturity and lack of wisdom. Fortunately Norris gains both as the book moves forward. Helping him in his journey are some truly excellent people. Norris's mom is amazing. It's always great when parents are present and doing their best in a YA novel. Liam is a quiet, strangely focused boy at Norris's school who wants to learn how to play hockey. Norris obliges. The friendship that grows between the two of them is wonderful. It's so different than his relationship with his best friend in Canada that Norris takes almost too long to recognize it for what it is. This connection helps him see the world in new ways and brings him into contact with more of the boys he goes to school with. Norris's relationship with his coworker and high school cheerleader Maddie is not so straightforward. But Maddie is great. She is an organizer, a great listener, and smart. She gives Norris advice and helps him understand the new culture he is in. She also has zero qualms about calling him out on his crap. As their relationship progresses, there is a sense it is heading for disaster simply because Norris is being a stubborn idiot and refuses to see the light. This is the reason for most of the conflict in the last part of the book. It is fairly predictable but is handled well and realistically.

The title of the book refers to a notebook given Norris by his new school guidance counselor. In it he writes his observations as he meets new people. His anger and his sarcasm all come out as he describes his first impressions of the individuals who now people his world. You can probably guess where that goes. Except Norris brings every bit of the trouble that falls on his head on himself. Because he doesn't see himself or those around him clearly at all. That is so typically human, and it was handled really well. The fallout and resolution might bother some in its realism, but I really liked where Norris ended up in the end. This is a time when I ended a book thinking the character's growth was going to stick. I really appreciated how each person is show as an individual an none of them are left as the two-dimensional caricatures Norris made them in his field guide.

One quibble I had with the book were the inconsistencies in describing some of Maddie's family members. I'm not sure who in the chain from first draft to published book should have caught them, but they fell down on their job.

I recommend that people who enjoy good character arcs and realistic high school stories read this one. I will certainly be looking forward to any of Ben Philippe's future books.