The Princess Who Flew with Dragons

November 27, 2019
It's great to have those authors you can always count on to provide a good story. It is even better when those authors consistently provide excellent series with multiple characters to love. Stephanie Burgis is one of those authors for me. The Princess Who Flew with Dragons is her latest MG novel and continues the world she developed in The Dragon with a Chocolate Heart and The Girl with the Dragon Heart. 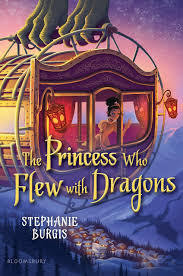 Princess Sofia has lived her entire life feeling second rate. Her older sister runs the kingdom of Drachenhiem ruthlessly and brilliantly. Sofia feels second best and second rate in comparison. All she does is make messes for her sister to clean up. The only time Sofia feels fully, comfortably herself is when she is immersed in one of her books or corresponding with Jasper, her dragon penpal. She can be herself with Jasper because she knows they will never be meeting, and therefore, he will never know what a disaster she is. When her sister sends her to the country of Villenne to learn more about their advances and kingdom, Sofia feels completely inadequate for the task, beginning with the travel sickness that comes on the instant she takes flight with her dragon escort. As she predicts, things go wrong from the moment she "lands". However, it results in her having the opportunity to explore the world from a different perspective. As she makes friends and learns more about the various problems and people of Villenne, she starts to feel a little more comfortable in her own skin, but then every thing seems to go wrong all at once in an explosion of angry elders and Ice Giants. In a horrible instant, the fate of several countries, including her own, comes to rest on Sofia's young shoulders. She must go on a perilous quest to save the world from war and winter.

Sofia's struggle to find a place in the world is one that will resonate with readers of all ages. She is coming from a privileged world and is quite naive to the layers and nuance of how people live, yet every time she learns something new about the world's injustices, she attempts to do what she can to make positive changes in both the world around her and her place in it. Sofia is incredibly book smart but needs to learn more about the world. Her deep insecurities and anxieties make it difficult at times, but she always finds the courage. She makes mistakes. She works hard to atone for those mistakes. In addition to Sofia, a wonderful cast of numerous new characters are introduced. She befriends a group of three goblins and kobold who help her explore and experience more of the world. Aventurine's younger brother Jasper leaves his safe home to come and see the world with Sofia instead of just living it through her letters. On the main rescue quest Sofia, Jasper, and the kobold Fedolia have to work together to achieve their different personal goals and save the wider world. Burgis does an excellent job of using them to change each other and impact the plot in different ways.

For such a light series for young MG readers, Burgis has tackled some pretty deep themes in the series overall, and that continues in this book as well. This is a fantasy that has different races of magical creatures and different nations all coming together in one place with all the misunderstandings, miscommunications, and mishaps that can cause. There is a lot said about education, diplomacy, and the postering of nations, but it is all presented in a way that will not overwhelm the target audience. It is one of those great novels that can be understood at different levels as well.

I think this is meant to be the end of the story, but I don't want it to be. It ends well. It would be a perfect end if it is the end. I just don't want to say goodbye to this world and the amazing characters who people it.

Jenna @ Falling Letters said…
It feels like I just finished reading The Dragon with a Chocolate Heart the other day, and now here is the final book! Good to know it's just as strong as the others.
November 29, 2019 at 11:47 PM

Brandy said…
@Jenna It is! I really don't want I too be over though!

With Prof. Mrs. DOROTHY LOAN INVESTMENTS. you can say goodbye to all your financial crisis and difficulties as we are certified, trustworthy, reliable, efficient, fast and dynamic
January 22, 2022 at 3:38 AM