The Grand Plan to Fix Everything

December 06, 2011
Sometimes a book comes along that is a balance of quirky, enjoyable, and well written. When it happens to be a contemporary fiction novel about a culture many young readers are not familiar with, so much the better. If you are looking for such a book then Uma Krishnaswami's The Grand Plan to Fix Everything is one to check out. 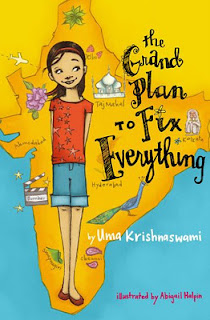 Summary (from Goodreads):
Eleven-year old Dini loves movies—watching them, reading about them, trying to write her own—especially Bollywood movies. But when her mother tells her some big news, it does not at all jive with the script of her life she has in mind. Her family is moving to India…and, not even to Bombay, which is the center of the Bollywood universe and home to Dini’s all-time most favorite star, Dolly. No, Dini is moving to a teeny, tiny village she can’t even find on a map. Swapnagiri. It means Dream Mountain and it only looks like a word that’s hard to pronounce. But to that open-minded person who sounds the name out, one letter at a time, it falls quite handily into place: S-w-a-p-n-a-g-i-r-i. An honest sort of name, with no surprise letters waiting to leap out and ambush the unwary. That doesn’t mean there aren’t surprises in Swapnagiri like mischievous monkeys and a girl who chirps like a bird—and the biggest surprise of all: Dolly. So now, Dini is hard at work on a new script, the script in which she gets to meet the amazing Dolly. But, life is often more unpredictable than the movies and when Dini starts plotting her story things get a little out of control.

This is a book many kids will be able to identify with even if they don't know anything about Bollywood or Indian culture. They will be able to sympathize with Dini feeling alone, like her parents don't always understand her, and the sadness she has at leaving her home and best friend Maddie behind. They will most likely be able to identify with her obsession with a pop icon and her feelings that if any fan is important to said icon, she is. The story comes complete with a host of quirky secondary characters to back Dini up.

The story itself is not unlike a Bollywood movie. It plays out in a similar way to a film. There are abrupt scene cuts, fade out, multiple angles viewed. There are places where the plot is a little zany and the characters overblown. That is part of the charm of the book and another thing I think will appeal to young readers.