Peter Nimble and His Fantastic Eyes

December 20, 2011
That title. The cover. If you are in any way a fan of children's fantasy I think it rather impossible to face those two things combined and not want to read this book. Then you read the synopsis and find out the main character is a thief and, if you are me, all thoughts of even attempting to resist this book's allure go out the window. But why would you want to resist? Jonathan Auxier has penned a delightful adventure full of magic, thievery, intrigue and militant ravens. Yes, there is oh so much to like in Peter Nimble and His Fantastic Eyes. 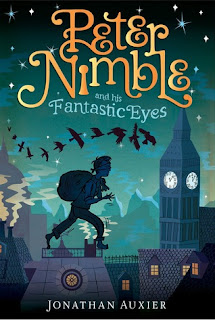 "Now, for those of you who know anything about blind children, you are aware that they make the very best thieves. As you can well imagine, blind children have incredible senses of smell, and they can tell what lies behind a locked door- be it fine cloth, gold, or peanut brittle- at fifty paces. Moreover, their fingers are so small and nimble that they can slip right through keyholes, and their ears so keen that they can hear the faint clicks and clacks of every moving part inside even the most complicated lock. Of course, the age of great thievery has long since passed;today there are few child-thieves left, blind or otherwise. At one time, however, the world was simply thick with them. This is the story of the greatest thief who ever lived. His name, as you've probably guessed, is Peter Nimble."
I shall start with the prose. Because this was one of those books. One of those books that had me questioning why I don't always have something handy with me for marking pages with quotes I like. This book is highly quotable. It speaks for itself right there in that first paragraph quoted above. I marked a lot of pages and that is not a usual occurrence in my reading. What I liked about the way this book was written is that it reads like a classic. Let me be clear and say this does not mean the writing is old fashioned or in any way stale. The feel of the story is just such that you think of it as one that has to have been around for decades, and yet it contains within it a very real sense of our modern time. How Auxier managed this I do not know, but manage it he did.


The story requires the reader to suspend belief a great deal. I always feel rather ridiculous stating that because it seems obvious. Of course it does. It is fiction. Yet this is fiction of a Tall Tale type. The stuff that is told of myths and legends long after they are gone. Think King Arthur. Or Davey Crockett killing a bear at the age of three. This has some of those type of elements in it and they enhance the story in many ways. The story itself is an incredible journey. There is a quest, high seas adventuring, a desert prison, scheming with a den of thieves, a kingdom under a curse, and an evil despot who must be stopped. It reads like something Dickens would have written if he decided Oliver Twist needed some magic in his life. Which could have been disastrous, but it's not. It is brilliant. And at the heart of it all is an orphaned blind thief named Peter Nimble.
Peter is awesome. He is an honorable thief. The best sort. He has lived a rough life and I felt for this poor little boy from the beginning. As his story continued I fell under his spell more and  more. He is not always likable. He can be arrogant, high handed, demanding. At times he is scared and helpless. At all times you can't help but want him to win the day. Peter is backed up by an odd yet wonderful assortment of supporting characters from his quest companion Sir Tode to a Guard Raven to the prickly pugnacious Princess Peg. They add to Peter's story in delightful ways and give much insight into who this hero is.
I recommend this for anyone who loves mystery and adventure and enjoys a good yarn.