The Horse and His Boy

Our last read aloud of 2011 is complete. We just finished The Horse and His Boy by C.S. Lewis. I had read all of the Chronicles of Narnia to Bit when she was four and she enjoyed them then. This time however she not only enjoyed this but was pulled into the story. She was vocal and opinionated about everything and really engaged with the text. It was heartwarming for me as this is my absolute favorite of the seven books. 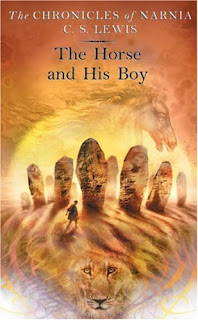 The Story
In Narnia it is the Golden Age as the High King Peter reigns with his siblings, but to the south of Narnia in the land of Calormen, a boy named Shasta has lived a simple and harsh life with his father in a fishing hut. Everything changes on the night a powerful Tarkhan wants to buy him as a slave and it is revealed that Shasta is not from Calormen at all. With the help of the Tarkhan's war horse, a talking horse captured from Narnia named Bree, Shasta escapes and head for the north and freedom. Along the way he and Bree form an alliance with a proud young Tarkheena named Aravis and her horse Hwin, also a talking horse from Narnia. They too are escaping life in Calormen. The four end up playing an intricate role in the fate of the northern countries of Archenland and Narnia, both of which find themselves under threat from Calormen.

Bit's Thoughts
I really like this book. It was my second time reading it. I enjoyed it much more this time and thought it was very funny. Especially the end. My favorite character is Aravis. I think she is very brave. She wants to go out all by herself. There is a character in this book named Lasaraleen who really annoyed me. She was silly and mostly cared about frilly dresses and all that. Aravis was so much better. I'm very happy that Aravis had a happy ending.

My Thoughts
Yes, this one, overlooked by many and hated by many who do actually read it, is my favorite of the series. I love how it is classic fantasy. There is a group of companions, a quest, a kingdom to save, an enemy to conquer, secrets to be uncovered, and an unknown heritage to be discovered. All the tropes of classic fantasy written before they were really tropes. This is the tightest of the plots Lewis wrote in any of the Narnia books. The story is wholly contained within this one volume. You can go into it knowing nothing of the other books and have all you need. The character arcs in this are also well done. Particularly that of Aravis, who is my favorite Narnia heroine. (I wrote about that more here.) From a Christian perspective I also appreciate the theology in this book and the way Lewis wove it into the story more than in any of the others. It is far more subtle, although still obvious, and is so layered. No matter how many times I read it I pick up on elements I missed before every time.

Bit and I won't be starting a new novel read aloud until January. There will be too many interruptions in the next couple weeks. When we do start back up we will be reading Mara, Daughter of the Nile by Eloise Jarvis McGraw.

Chachic said…
You read the Narnia books to Bit when she was four? Hmm my godson is five and maybe I should give him the Narnia books for his next birthday. I got him a Roald Dahl book for Christmas.
December 18, 2011 at 10:19 AM

Brandy said…
We read them to her then because she asked. She was asking for novel read alouds at the age of 3. My son is no where near ready for them yet and he is 3 and a half. It depends on the kid. I think Roald Dahl is a great choice to read to a five year old and they will be books he can read early on once he becomes a fluent reader himself.
December 19, 2011 at 8:11 AM