June 05, 2012
Criss Cross by Lynne Rae Perkins is a Newbery winner of the past decade that for whatever reason I hadn't read yet. I thought it was about time to change that. I can see why the committee liked it. 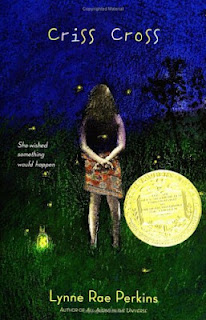 The people in this book are fourteen years old, and there is romance, but it’s mostly the kind of romance where one person looks at another person and that person looks at the first person, but their looks miss each other, maybe only by a second, and they don’t connect. There is a a scene in the Hitchcock movie Strangers on a Train where the wacko guy does this with his hands and says, “Criss Cross.” He’s talking about something else (murder) but I’m talking about those just-missed opportunities to connect. This might sound discouraging, but I think it’s actually encouraging to know that we came pretty close, and if we keep trying, we’ll get it right.

In the beginning I really thought I was going to love this book. It has the sort of language I revel in. And revel in it I did. I appreciate how this book was written.

He looked at the musician again who didn't seem so ordinary anymore. His music had transformed him, or revealed a part of him that was plugged into the cosmic life force. A life force that seeped in, through, and under the music, like God in the Communion wafer. An everyday kind of life force, though, that could do this in a song about a chicken. More about earth than heaven. Also girls really liked it.

She knew that she would have to talk. She should have been able to do it. But she had developed a black hole in her brain. She could be in the middle of a normal conversation with a boy and the instant she thought of him that way-as a boy-the black hole sucked all her words away. Except a few stupid ones. The stupid ones stayed in there.

There was a lot to love about the language, but in the end the book was simply to episodic for me to connect with any of the characters. It is a book about connection or the lack thereof. About almost but not quite connecting with another person. So this may have been the author's intention. It kept me too distant to really care though. It turned out to be a good thing as if I had cared I would have been over the top infuriated by the end. As it was I was too detached to really care.