June 09, 2012
The Princess Curse by Merrie  Haskell is a retelling of "The Twelve Dancing Princesses". Yes. Another one.  I have officially lost count of how many this makes. This one is a bit different though because it doesn't just stick to that tale.

Synopsis (from Author's Website):
Twelve princesses suffer from a puzzling—and downright silly—curse. Ridiculous though the curse may be, whoever breaks it will win a handsome reward. 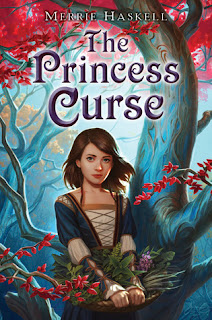 Sharp-witted Reveka, an herbalist’s apprentice, has little use for princesses, with their snooty attitudes and impractical clothing. She does, however, have use for the reward money that could buy her a position as a master herbalist.
But curses don’t like to be broken, and Reveka’s efforts lead her to deeper mysteries. As she struggles to understand the curse, she meets a shadowy stranger (as charming as he is unsettling) and discovers a blighted land in desperate need of healing. Soon the irreverent apprentice is faced with a daunting choice—will she break the curse at the peril of her own soul?

I enjoyed Reveka's character. She was brave, spunky, resourceful, and quick thinking. I loved that the heroine of the story was not one of the princesses, but a simple servant whose goal was to be a famous herbalist and be left in peace at a convent. This is why she wishes to break the curse and win the prize money. The stakes are upped a bit when she discovers what happens to people who fall asleep in the princesses chamber. I really enjoy retellings that spin something new from the original and this one certainly does that and in many good ways.

Then comes the creepy part (which I was prepared for from reading other people's reviews). Still. It managed to dull my enjoyment. This is where the second story is incorporated, and that story is strongly reminiscent of the myth of Persephone. There are pomegranates and everything. And Reveka is playing the part of Persephone. She is 13. THIRTEEN! And Dragos aka Hades is most definitely no where close to 13. There is a plot point that in the end makes this sort of palatable, but still to make a decision like Reveka makes at that age.....I think I would have really enjoyed this darker element of the story and the world of Thonos if Reveka had been older and this had been a truly YA book rather than a MG one.

Other people might not have this issue. This may be coming from me having a young daughter. Middle school girls might really like the whole idea of the bad-boy-who-can-be-saved idea. I know I would have at that age. As an adult I have a more difficult time with that concept.

The end sort of leaves one plot line a bit open making me wonder if there is going to be another book. If not that dangling thread is a bit annoying.