The Statistical Probability of Love at First Sight

June 21, 2012
Every now and then I want to read a light contemporary read with a bit of romance. These are not go to books for me, just something I read to cleanse the palate. I often find myself disappointed when I read them, they never quite live up to what I want them to do. The Statistical Probability of Love at First Sight by Jennifer E. Smith was an exception. I thoroughly enjoyed it. 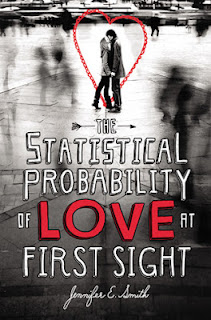 Synopsis (from Goodreads):
Today should be one of the worst days of seventeen-year-old Hadley Sullivan’s life. She’s stuck at JFK, late to her father’s second wedding, which is taking place in London and involves a soon to be step-mother that Hadley’s never even met. Then she meets the perfect boy in the airport’s cramped waiting area. His name is Oliver, he’s British, and he’s in seat 18C. Hadley’s in 18A.
Twists of fate and quirks of timing play out in this thoughtful novel about family connections, second chances and first loves. Set over a 24-hour-period, Hadley and Oliver’s story will make you believe that true love finds you when you’re least expecting it.

This book really surprised me. I expected something along the lines of a movie plot, but it is more than that. There is, of course, the meet-cute. What teenage girl on a trans-Atlantic flight wouldn't dream of getting to spend it with a cute guy with an accent named Oliver? What a perfect way to begin a trip to London. But this isn't just any trip for Hadley. She is a girl in turmoil and Oliver helps distract her from her turmoil. She in turn is distracting him from his, though she is less aware of that. Their interactions are genuine and believable as the discuss everything from the animated duck movie they are watching to Dickens to their favorite colors to their beliefs on love. There is definitely an attraction simmering underneath all of this and there are enough heated glances and romantic tension to satisfy without being over the top.

It is almost wrenching when the plane ride is over and Hadley and Oliver go their separate ways. This story is not just a fluffy romance though. It is Hadley's story and encompasses all the complexities of her life. That includes dealing with her estranged father, his wedding, and meeting her new stepmom. In the midst of all this there is a coincidence that brings Hadley and Oliver together again. Well, a coincidence that Hadley follows up on to bring them back together. I really liked the way their stories intersected and affected the greater activity of Hadley's life. I appreciated the way things resolved between Hadley and her father as well. He is portrayed as a real man, one with considerable faults, but also one with strengths.


The end is sweet without being too sugary, with a satisfying hint of happiness to come.

Chachic said…
I've seen mostly positive reviews for this book and it's already on my TBR pile, planning to read it soon. Other contemporary reads that I'm interested in are My Life Next Door by Huntley Fitzpatrick and Easy by Tammara Webber.
June 24, 2012 at 11:48 PM

Brandy said…
I hope you enjoy it! Hmmm...I'm sort of on the fence about My Life Next Door, whether to read it or not. Easy sounds like it has too much of the drama going on for my taste. Reading the synopsis made me feel it was a little much (1 ex boyfriend+2 potential love interests+1 stalker; Who is this girl???) I'll be interested to see what you think when you read it. Maybe you can convince me to read it too.
June 25, 2012 at 9:21 PM