November 06, 2012
Enchanted by Alathea Kontis is a fairy tale reworking combining several fairy tales, most notably "The Frog Prince". And "Cinderella". And "Sleeping Beauty". And "Jack and the Beanstalk".  Yes, all of them. And that is only the beginning. 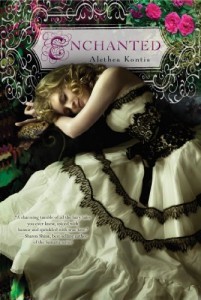 It isn't easy being the rather overlooked and unhappy youngest sibling to sisters named for the other six days of the week. Sunday’s only comfort is writing stories, although what she writes has a terrible tendency to come true.
When Sunday meets an enchanted frog who asks about her stories, the two become friends. Soon that friendship deepens into something magical. One night Sunday kisses her frog goodbye and leaves, not realizing that her love has transformed him back into Rumbold, the crown prince of Arilland—and a man Sunday’s family despises.
The prince returns to his castle, intent on making Sunday fall in love with him as the man he is, not the frog he was. But Sunday is not so easy to woo. How can she feel such a strange, strong attraction for this prince she barely knows? And what twisted secrets lie hidden in his past - and hers?

"The Frog Prince" is a difficult tale to adapt because one of the characters is a frog. And this frog is supposed to be the romantic hero. It complicates things. It complicates things further when the author tries to throw a bunch more tales into the mix of the plot. In addition to those tales mentioned above, other tales woven into the story in different ways include "The Princess and the Pea", "Rumpelstiltskin", and "The Red Shoes." Also the nursery rhymes "The Old Woman Who Lived in a Shoe" and "Jack Sprat Could Eat No Fat, His Wife Could Eat No Lean" (okay that last one may have just been me making assumptions). Too much? Yes. It is. Waaaay too much. Because of all the other story elements, the development of Sunday and Grumbol-the-frog's relationship was rushed so there was not much depth there. We are told they have deep feelings of love and devotion and have to go with it. Then it turns into a rather complicated "Cinderella" meets "Sleeping Beauty" story wherein the good fairy vs the evil fairy thing is messing with Rumbold's plan to win Sunday's heart at the balls. Then there is the strange stuff the King is up to...Honestly, it was not too hard to follow I just couldn't figure out why Kontis felt including all of it was necessary and much of it was absurd.

The character development is the true victim of this complex web of plotting, which is probably why I had a hard time connecting with this story at all. We all know how I love my characters. Sunday spends a great deal of time feeling sorry for herself and grumbling. She is not at all proactive and though she is supposed to be special as a seventh daughter she never actually does anything. Rumbold was far more interesting. He has a past as a wild boy, but he can't remember it at all. He is trying to find his place in a home he can't remember while trying to rewin the heart of the girl he loves and this was the most interesting part of the story to me. I loved his relationship with his two best friends (his cousin and a guard). Their camaraderie and banter were what actually kept me reading to the end.

When compared to most other retellings, this one falls far short for me. As a retelling of "The Frog Prince" it can't come anywhere near to what Wildwood Dancing by Juliet Marillier is. (I don't think I'll ever love another frog the way I loved Gogu. And he couldn't talk.)

Christina said…
Oh dear. I'd seen a couple of reviews where the reviewer wasn't impressed, so I'm not that surprised. I still will probably try it, just because I love fairy tales, however, I'm not expecting much.

A romantic frog's going to be tricky, yes. Also, in the Grimm's version, the heroine is a jerk. The frog tries to get her to fall in love with him and the dad orders her to be nice. At the end, she throws him into a wall and he turns into a prince. I just...no.

Now I want to go read Wildwood Dancing. The fact that he couldn't talk reminds me of Dolamore's Magic Under Glass. I'm also thinking of Nawat the crow from Trickster's Choice. *swoons*
November 6, 2012 at 5:24 PM

Brandy said…
It wouldn't have mattered how many unfavorable reviews I saw, I still would have read this because it's a fairy tale retelling. But yeah-lower expectations.

And yes, the heroine is such a jerk in the Grimm version.

Wildwood Dancing is so good-if you haven't read it I highly recommend it. It's also a retelling of "The Twelve Dancing Princesses" only she reduces the number of sisters to 5 (which helps). I haven't read Magic Under Glass yet because our library doesn't have it and I have been nervous about buying it.
November 6, 2012 at 10:34 PM