November 26, 2012
Meant to Be by Lauren Morrill is a book I discovered via Bookshelvers Anonymous when she did a Cover Love post on it. (The cover is certainly deserving of love.) Then I read the synopsis and knew there was no way I was going to miss out on on reading it. 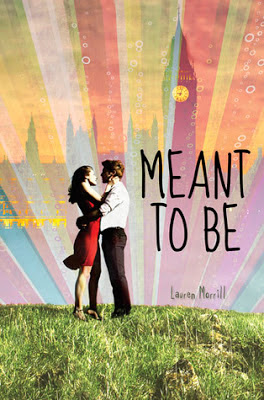 Julia is on a junior class trip over spring break to London. London! This is the city where her parents honeymooned. The country that gave birth to three of her favorite things: The Beatles, Jane Austen, and Shakespeare. Julia's is excited and ready to take in every piece of knowledge and experience that could be enriching. She is prepared. Julia is always prepared. She is a planner and even knows who her MTB (meant-to-be) is, Mark the boy she shared a backyard wedding with when she was in Kindergarten.  She is the sort of girl who memorizes her itinerary, never goes anywhere without a book, always has sharpened pencils (and a pencil sharpener-just in case), and carries a pocket Shakespeare with her. She is ready for anything. Except being partnered with Jason Lippincott.
Jason Lippincott who has the maturity of a seven year old and the rambunctiousness of a puppy.
Jason Lippincott who can charm his way out of most of the trouble he gets himself in.
Jason Lippincott who calls her Book Licker.
After Jason convinces Julia to attend a party with him the first night, Julia begins receiving mysterious texts from a boy she can't remember meeting. Jason steps in and agrees to help Julia track down her mysterious texter. As the two begin to explore London looking for Julia's admirer she begins to realize there is more to Jason than she originally thought.

Meant to Be has the sort of characters I love to read about, characters that are real and layered. Julia is a character I could certainly relate to. I like how Morrill made her a well rounded person. Yes, she is a book lover and enjoys school, but there is more to her than that. She has many friends and is a star swimmer. She has a life, it is just very different from the other students on the trip with her. Julia is flawed too. She is self-centered and has a tendency to make snap judgements about people before getting to know them. She is an unreliable narrator, as any of us narrating our own life would be, only seeing what she wants to and stubbornly refusing to look further. This characterization feels genuine for a 17 year old who is an only child and has lived alone with her mom for the decade since her father's death. All of this makes her more of a real person and she jumps off the page. I love how she tells her story too. She is funny and becomes more self aware as her journey continues. Jason is also a well-rounded character. It is little wonder that I liked him so much, he has many of the characteristics that I love in my heroes. He is intelligent but indifferent about school work. He is one of those who will put forth the effort if it interests him, but is unwilling to jump through the hoops the establishment sets up just to show them he can. He is a charmer, the type of guy who can talk his way into or out of anything. He will pick up a guitar and sing a Beatles song under a London bridge, and kiss a girl in a rain-soaked field. He can also be obnoxious and ridiculous. I appreciated how he came across as genuine as well. He isn't one of those super-perfect-too-mature-ridiculously-good-looking romantic heroes. There are times he does things that just scream teenage boy, and that is refreshing to see.

I really loved the chemistry that Julia and Jason have, the conversations that many people would call bickering, but is really flirting. They reminded me a bit of Ron and Hermione. Or Han and Leia. People who are very different, but in their differences make the other better. This will always be my most favorite type of love story, readers, and do you know why? Because that is the dream I'm living. And it's awesome.

I enjoyed following Julia and Jason on their trip through London. The story is mostly one that is about Julia figuring stuff out. She knows who she is, she needs to figure out what that means in relation to other people. She needs to learn to see people as they are in reality, and not as the people she has created in her head. There is a bit of drama here and there. Conclusions are jumped to. Mark-the-long-time-crush shows up at one point further complicating things, but it all worked for me. I never felt like it was too much. I loved the conclusion of the mysterious texter storyline. The only thing that bothered me a little was a couple brand name mentions, but for the most part they made sense in the narrative.

I have a feeling Meant to Be will be a novel I come back to every time I am in need of a feel-good-fun read.

This is Lauren Morrill's debut novel and I'm excited to read more of her work in the future. Her next novel is due to come out in 2014.