Starry River of the Sky

November 08, 2012
Starry River of the Sky  is the companion novel to Grace Lin's Newbery Honor winning Where the Mountain Meets the Moon. Just like its predecessor the book is a work of visual art, and this time I think the narrative is even more well done. 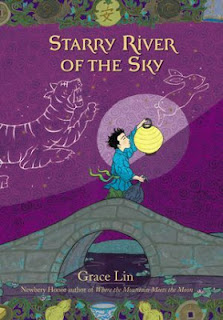 Synopsis (from Goodreads):
The moon is missing from the remote Village of Clear Sky, but only a young boy named Rendi seems to notice! Rendi has run away from home and is now working as a chore boy at the village inn. He can't help but notice the village's peculiar inhabitants and their problems-where has the innkeeper's son gone? Why are Master Chao and Widow Yan always arguing? What is the crying sound Rendi keeps hearing? And how can crazy, old Mr. Shan not know if his pet is a toad or a rabbit?
But one day, a mysterious lady arrives at the Inn with the gift of storytelling, and slowly transforms the villagers and Rendi himself. As she tells more stories and the days pass in the Village of Clear Sky, Rendi begins to realize that perhaps it is his own story that holds the answers to all those questions.

Where the Mountain Meets the Moon is a good old fashioned quest story where the characters are on a journey and go to many places. Starry River of the Sky takes place in one small village and all the stories center around it and the people living there. Rendi is the main character and he is on a journey. While running away he is marooned in the Village of Clear Sky. He hates the place and all its inhabitants. He looks down his nose and scoffs at them. Rendi is teachable though and with the arrival of Madame Chan and the stories she tells he begins to become more sociable and makes friends with those who surround him. I loved Rendi as the prickly stuck up snob and I loved Rendi as a great friend and hero. His journey from one to the other is a wonderful story. Rendi's relationship with all the characters around him and the changes to them is also delightful.

As in the first book, Starry River of the Sky depends on the art of storytelling. Rather than having several narrators the stories here are mostly all told by the same two, the mysterious Madame Chang and Rendi. Lin wove the stories of both together with the story of the missing moon to create a beautiful narrative. The story is interesting and put together piece by piece just right. Just as in the first book the narrative is accompanied by Lin's gorgeous art, but I feel like the story in this one is great enough on its own and the pictures are just an added bonus.

If you enjoyed Where the Mountain Meets the Moon, you will most assuredly like this companion. If you haven't read either, you should. And it doesn't really matter which one you read first. They are not dependent on each other.