City of a Thousand Dolls

June 26, 2013
I adore fantasies. I also adore murder mysteries. Combine the two and I am one happy girl, which is why I thoroughly enjoyed City of a Thousand Dolls by Miriam Forster. 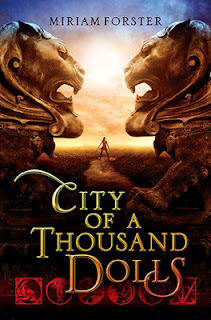 In the Bhinian Empire there is a law stating that every family may only have two children. Boys being preferred over girls, it is the girls who are abandoned. The City of a Thousand Dolls was started to save the future generations. Families can send their daughters to the city where they will be trained to find a place in life as a wife, mistress, musician, healer, or scholar. Nisha is a resident of the city with no set place, the assistant of the Matron, her eyes and ears in the city. She has been trained in combat and music and is free to come and go in the houses as she pleases. Wherever she goes she is accompanied by one or more of the city's cats, whose voices she can hear. When girls in the houses start to end up dead and Nisha realizes her own future is not as secure as she thought, she begins working to find the killer. Hopefully in time to save herself.

Nisha is one of those characters that is special due to birth, but doesn't know it yet. She is still very young and there is so much she doesn't know. This book is a lot about her figuring that out, who she is and where she fits into the world. She has been kept in ignorance and that becomes a danger to her and everyone. This is not Nisha's fault and I really feel she did the best she possibly could with the knowledge she had. She also acknowledges her own weaknesses and shortcomings. There are so many other characters in this book that I had to flip to the character list in the front to keep everyone straight. Nisha and Jerrit (her cat best friend) are the most memorable though and I came to love both of them greatly.

The plot is an engaging one. It s one of those books that is difficult to put down. The murders, clues, and constant action kept me engaged. I did figure out the mystery early on, but not being able to guess the culprit is not a mark of a good mystery to me. Believing the investigator can't and seeing the clues and action unfold in a plausible manner matters more to me. I think this book does this well, especially as Nisha had no idea what she was doing.

The world building here is fairly typical. There is magic, kingdom politics that aren't all what they seem, different tribes of people who see history in different ways. I liked the way it all worked together here and Forster made it a real live place for me. The themes of gender equality (or lack thereof), freedom of choice (or the illusion of it), and politics in general were deftly woven into the plot.

This is a YA novel that skews younger and can be enjoyed by mature MG age readers as well. There are mentions of girls being trained as mistresses, but what a mistress does is not really defined. I would have no problem letting Bit read this if she wanted to, but it probably shouldn't get into the hands of a MG reader who knows nothing about such things.

I thoroughly enjoyed it and am excited to see there will be a companion novel sometime n 2014.