The Watcher in the Shadows

June 03, 2013
The Inquisitor's Apprentice (my thoughts) was one of my favorite reads of 2011. And I feel like I've been waiting for it's sequel, The Watcher in the Shadows, forever. I pre-ordered it, not so patiently waited for it to arrive, and immediately bumped it to the top of my reading pile when it finally came. All that waiting was so worth it. 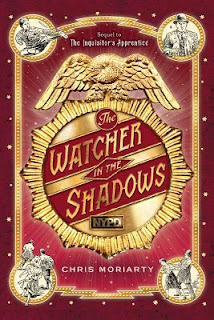 Synopsis:
At the turn of the twentieth century, New York’s Bowery District becomes the scene of a terrible murder when the Klezmer King gets fried to a crisp by his Electric Tuxedo—on stage! The Inquisitor’s apprentice, thirteen-year-old Sacha Kessler, tries to help find the killer, but the closer he gets to solving the crime, the more it sounds as if the creature that haunted him in his first adventure is back. Worse still, his own Jewish family is in danger. Sacha has avoided learning magic until now, but as his world falls apart around him, he changes his mind.

Sacha is far more proactive and outgoing in this volume, though often unclear which direction to take and be proactive in. His struggle is a very real one that has me very concerned for him overall. He is striving so hard to hold onto his integrity in a world where everyone is for sale. He wants to be a good Inquisitor, a good Jew, a good brother, an a good son. But these things are far too often in conflict with each other. Sacha doesn't want to compromise on any of it, and it doesn't make it any easier when he constantly finds himself tempted by deals with gangsters and threats of millionaires. Lily, Sacha's fellow apprentice, was a little more frustrating. I felt that she remained fairly stagnate and changed little from the first book. This could be excused by her privileged background which does not require her to face the adversity necessary to change. However there was one major event toward the end of the book that should have had some sort of impact and then wasn't really dealt with. I hope it will be addressed more in the next volume.

The adult characters continue to fascinate me the most, though that may be because I'm an adult. The reader finds out a little bit more about Max's background and his relationship with Shen, but not nearly enough. The mystery building up around Max is one of the most fascinating aspects of this story. He is far from perfect, but how far is not  yet clear. Sacha desperately wants him to be a hero. He is the ideal Sacha wants to live up to, but he doesn't entirely trust him either. Their interactions are fascinating character studies of both of them.

The alternate universe NY setting continues to be one of the best parts of the story. The history is so accurate and yet so fantastical at the same time. It is a brilliant balance Moriarty has established. The story and mystery here are more intense than the first. The stakes feel higher and I love the inclusion of so much more of the Jewish element.

Last I knew there are supposed to be five books total and I can not wait for the release of the next one.