August 19, 2013
This trilogy. My love for it is endless. I really enjoyed The Girl of Fire and Thorns (my thoughts) and absolutely fell in love while reading The Crown of Embers (my thoughts). I have been dying to get my hands on The Bitter Kingdom from the moment I finished reading The Crown of Embers and am grateful to Greenwillow for allowing me to read an advance copy. This ladies and gentleman, is how you end a trilogy. I had all the feels while reading it, and a good book hangover after.

Spoilers for the first two books are impossible to avoid. Go read those before you read this review. 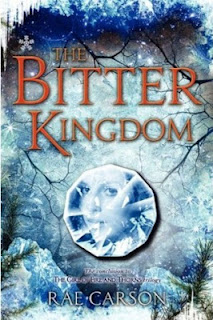 Elisa is a fugitive in her own country. Her enemies have stolen the man she loves in order to lure her to the gate of darkness. As she and her daring companions take one last quest into unknown enemy territory to save Hector, Elisa will face hardships she's never imagined. And she will discover secrets about herself and her world that could change the course of history. She must rise up as champion-a champion to those who have hated her most.

There is so much I want to say, but will restrain myself so as not to include spoilers. There is still a lot I can say anyway.

Elisa's growth and development over the course of her story is so well done. In this volume she truly comes into her confidence as queen and woman. I love what Carson did with the Godstone storyline too. This is not about Elisa being a chosen one, it's about her being human. I continued to appreciate the depiction of Elisa's faith, her doubts, and questioning. It's like reading my own thoughts on such matters at times. I think a lot of the reason Elisa's character speaks to me so much is that I can see a lot of myself in her so I sympathize with her and understand her.

The addition of chapters from Hector's point of view are a definite bonus. I enjoyed being inside his head. I appreciate how it isn't easy for him to reconcile his feelings for the woman he loves and the queen he serves. In so many ways they are equal partners, but it can't be escaped that she is his Queen. The tension and conflict he feels over this is something any man would struggle with I think. I also love the juxtaposition of Hector the man and Hector the commander. Just as Elisa is not easily separated from her role as Queen, Hector is not easily separated from his role as commander. And yet the two sides of both of them come out in different ways and it was interesting watching both of them juggle and balance their roles and their relationships to each other.


Elisa and Hector are now one of my favorite literary couples, but this story is so much bigger than their romance. I often get annoyed at how a romantic element in a plot is dragged through too much drama and tension, not allowing the resolution of feelings until the end. Carson does not subject her plot to this. This isn't about them falling in love. They have a country to rescue, people to save, magic to confront, and they happen to be in love while they are doing all of this.

The council between the three queens, Elisa, Alodia, and Cosme, had just the right amount of tension. These are three intelligent rulers with complicated relationships with each other. Seeing the three of them interact and come to terms with what they must do for their countries is a highlight of the book for me.

The world building in this trilogy has always fascinated me because just when you think you understand it, that it can be explained, you discover something new. I like that Carson doesn't ever fully explain it. I like that there are questions unanswered and  unknown mysteries. That is what makes a world real after all.She did reveal a detail this time around that totally changed the way I thought of about it. It is a game-changer, and again not ever fully explained. I LOVE THAT. It would be less real if it was, because how much of our own world can be conveniently and concisely explained?

Other thoughts:
I like Storm so much more than I ever thought I would.

Red was a wonderful addition to the cast of characters.

I could have done without the Deathstalkers. Yeah, I had nightmares. (Why do my favorite authors persist in putting many legged creatures who swarm into their books?)

This trilogy is one I will be returning to in the future for sure. In fact, as soon as my purchased copy arrives I'm doing a reread.

I read an e-gally provided by Greenwillow via Edelweiss. The Bitter Kingdom is a available for purchase on August 27th.

Sam (Realm of Fiction) said…
I only skimmed your review as I still have to read Crown of Embers, but I'm so happy to see that you liked the final book! I really enjoyed the first and looking forward to continuing soon. :)
August 19, 2013 at 5:39 PM

Brandy said…
Oh you have such an exciting journey ahead! Crown of Embers is when I really fell in love with this trilogy.
August 19, 2013 at 9:12 PM