August 25, 2013
I didn't know much about The Lost Kingdom before starting it. I never read the synopsis. I knew Matthew Kirby wrote it, and as I quite liked Icefall (my review) that was all I needed. I wish I went into more books this way. Not having any idea what the story even is, I'm always pleasantly surprised with what I get. This one is a great read from start to finish. 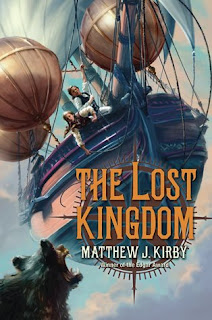 In this extraordinary adventure story, Billy Bartram, his father, and a secret society of philosophers and scientists venture into the American wilderness in search of the lost people of the Welsh Prince Madoc, seeking aid in the coming war against the French. Traveling in a flying airship, the members of the expedition find their lives frequently endangered in the untamed American West by terrifying creatures, a party of French soldiers hot on their trail, and the constant threat of traitors and spies. Billy will face hazards greater than he can ever imagine as, together with his father, he gets caught up in the fight for the biggest prize of all: America.

Set just before the beginning of the French and Indian War, The Lost Kingdom is historical fantasy that combines real life historical figures, science fiction, and fantasy. Kirby deftly wove these three strands together. There was a moment at the end where I thought maybe a little too much was thrown in there, but this is a minor glitch and Kirby makes it work. Benjamin Franklin has a cameo in the story, as does a young George Washington commanding his fort on the frontier. I was impressed with Kirby's interpretation of Franklin especially. He did a fantastic job of maintaining the historical integrity of his characters and setting while building the fantasy elements into it. This is not an easy task. Oh so many authors fail at it. Interestingly, the main character and his father are both based on actual historical figures as well. The world was never explained or detailed too much. Kirby let his story build the world for him. It was easy to picture the ship, the places Billy was seeing, and the adventures encountered.

What really shines in this story is the characters, particularly Billy and his father. As much as this is a tale of adventure and magic in the the wilds of unexplored America, it is more the tale of a relationship between a boy and his father. Through the narrative of a fast action adventure story, Kirby gives the reader an extraordinary view of humanity. The interactions between Billy and his father are at the center of this. Billy is a young man coming into his own. He is figuring out what it is he believes and wants out of life, and is disheartened to realize it isn't everything his father is. This is a story of that moment when a child sees his father for the man he is. What I truly appreciated about this is that John isn't a bad man. He is a human one. He does so much good, and yet he has some nasty issues and is a racist, refusing to believe any Indian could be a good person. Watching Billy struggle with seeing this in his father, and his father struggle with seeing himself through Billy's eyes is something I think any reader can identify with on some level. The other scientists on the expedition are not quite as fleshed out, but their personalities do all shine when needed and each has a distinctive characterization. Jane is my one complaint regarding characterization in the story. I'm not really sure why she was there. Was she included to attract girl readers? Because she really has no function in the story except to be ridiculously headstrong, wander off, and cause a skirmish at one point. Even as a potential crush for Billy she falls way short. Honestly, I would have preferred if she were left out and this was a book with no female characters in the main team. It would make sense for the time period and is better than including one and getting it wrong.   This is the one thing about the book that kept me from loving it with 100% of my heart.

It is a story full of action and suspense. There are spies and accusations of treason, a lost civilization to find, a bear-wolf chasing them, an enemy army to avoid, and each other to contend with. It's such a fun story and exactly the sort of adventure that kids (and me!) love to read.

I read an e-galley received from the publisher, Scholastic, via NetGalley. The Lost Kingdom is available for purchase August 27.

Brandy said…
It really is fun. And I wouldn't hesitate to give it to a kid studying the time period.