June 27, 2015
I'm still making my way through the full backlist of Diana Wynne Jones. Since I was participating in the 48 Hour Book Challenge last weekend, I decided it was a good time to tackle Deep Secret. I've owned this book for a while but hadn't gotten to it yet. It was an excellent book. Not surprising. 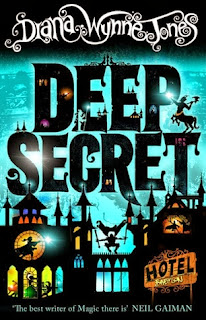 Rupert Venables is a young Magid. As a young Magid, it is his job to look after the Empire of Koryfos. It always goes to the youngest Magid because no one else wants it. Upon returning from a trip there that fills him with as much disgust as possible, Rupert is faed with the death of his mentor. Since Magids must be replaced as quickly as possible, Rupert (who is again the default Magid responsible for this) begins his search with names Stan left him. After meeting the person he thought was his most likely candidate, Maree Mallory, and immediately taking a dislike to her, he begins a working to draw all his final candidates to one place and time so he can evaluate them all at once. The place is the Hotel Babylon and the time is a sci-fi fantasy convention taking place there over a weekend. Much to Rupert's exasperation none of the other candidates are up to snuff. Maree turns up at the convention as well and turns out to be not as bad as Rupert feared. And because everything has to happen at once, the Empire of Koryfos is falling apart after a mass assassination. No one knows who the next ruler is supposed to be, and they need Rupert's help. Now Rupert has more than one magical working in the process and may have be in way over his head.

Diana Wynne Jones excelled at writing a certain type of hero. That type of hero happens to be the type I love to read about which always makes her books fun for me. Rupert fits nicely with the others I love but he also has his own individual personality. He is arrogant and a little to sure of himself. He spirals into panic so fast when everything starts coming down around him, and it's quite delightful. I did like that he knew when he needed to get help, and that he had a supportive community willing to help him when he needed it. The narrative switches between Rupert and Maree. Maree is an excellent foil for Rupert, and her naive and innocent, yet equally annoyed perspective on everything that is happening is a great counter-point to his frustrated, overwhelmed, harried, pessimistic one. Maree's younger cousin, Nick, is also a pivotal character and is a DWJ hero in training. He is basically a younger version of Rupert, a fact Rupert is hilariously unaware of for a good deal of the story and has to have pointed out to him by more than one person. I loved all three of them and all the supporting characters.

One thing I love about Diana Wynne Jones is that her novels defy age categorization.  We need more novels that do this. Does this book work as YA? Yes. Does it work as adult? Yes. Could even work as a MG? Yes. It is good fantasy for any age reader who loves stories with magic, centaurs, zany capers, and humor. What I really like about Deep Secret is how it celebrates but also pokes fun at the industry that has built up around speculative fiction. There are some problematic aspects in this (fat jokes that are unnecessary), but for the most part it is done well and balances on a fine line. Basically in the end I loved this because it was fun and complex at the same time. It has serious moments, but it never takes itself seriously overall. I'm looking forward to reading the companion novel, The Merlin Conspiracy.