June 01, 2015
Black Dog by Rachel Neumeier was one of my favorite books of last year. I basically wanted the sequel from the moment I closed the book. When its publisher, Strange Chemistry, closed its doors, I knew a moment of panic that I would never see it. Fortunately Rachel Neumeier is self-publishing the  sequels. (I reviewed the collection of short stories a few weeks ago.) Pure Magic, the second novel, is available now, and it is fantastic. 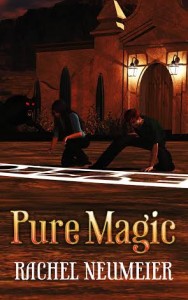 Following a tragic flash flood that took the life of his mother, Justin is wandering with no direction. One night after accepting the hospitality of a priest, he finds himself the target of a vicious werewolf attack. Two other werewolves intervene and save his life. These two are more civilized, but very insistent that Justin come with them to a place called Dimilioc claiming he is Pure and that this attack won't be the last. In fact they're completely confused as to how Justin has survived this long not knowing anything about the magic running through his veins. They are also surprised that he is a Pure male. This is new. Justin finds himself reluctantly accompanying them to the mysterious Dimilioc to meet their Master and discover the dangerous heritage in a violent world he only vaguely understood from the new before this. There he meets the other Black Dogs and Natividad, a Pure girl who can help him unlock his abilities and teach him how to wield his power. But Justin is not convinced he belongs in this world, and he wants some answer. He decides to go and see what his grandmother learns and Natividad leaves with him on a mission of her own. There are dangerous and violent changes occurring in the world of the Black Dogs though and that danger is going to stalk the two Pure and help from their Black Dog allies may be too far away-and too distracted by their own troubles-to help them.

Coming into the world Neumeier created from an outside perspective in this second novel is an interesting way of reintroducing all of the important players and elements and also adding to the layers of the world. Justin is so much more than a vehicle for the reader though. Confused, angry, desperate, and so sad, he is overwhelmed by all of the new information coming his way when he was already feeling alone and emotionally wrecked. His reactions to being thrown into this world and experiencing the violence of the Black Dogs up close for the first time are completely relatable and serve as an interesting contrast to Natividad and Miguel's easy acceptance of the life they were born into. As a new character in the story, he also brought out aspects of the other character's personalities and revealed new things about them. Justin's relationship with Keziah does not start off well. There are expectations about relationships between Black Dogs and the Pure. Even though Justin is the first Pure boy anyone at Dimilioc has encountered, matching up with Keziah is the first thing that pops into everyone's heads. She's not happy about it. He is even less so when he realizes what everyone is thinking. She terrifies him (understandably), and he terrifies her in a different but no less potent way. I really enjoyed watching the two of them warily feeling each other out. Justin actually learns Pure magic quickly because he is a math genius and I loved this dimension of his character.

Natividad has just as much page time in this novel as Justin does and is still very much a main character. Her 16th birthday is rapidly approaching, and she is still trying to figure out exactly where she stands in Ezekiel's mind. Is she merely a convenience being the only Pure girl around or does he really want her? Natividad uses her road trip with Justin to work through some of her confused feelings. I loved the way both of these relationships developed over the course of the book. Natividad and Justin make a really good team and they bond rather quickly. Granted they have little choice but to learn to work together quickly or die. However, they do work hard to understand and learn from each other. The development of Natividad's relationship with Ezekiel is more complex. Again, Ezekiel is my favorite part of this book. (There is an added dimension to the tension here that comes from having read his story in the short story collection. You can still appreciate everything that happens here without reading it, but it's so good and adds so much that I highly recommend you do.) He makes some decisions that won't entirely make sense if you don't fully understand his past. It was a nice change to see him not so entirely in control in this and more than a little vulnerable.

There is a lot going on in the plot of this book. The Blood Kin, who the Black Dogs thought they had completely eradicated, seem to be rising again. There is a rogue band of Black Dogs wreaking havoc. With Dimilioc's decreased numbers from the war, they are vulnerable on every side. Justin and Natividad putting themselves at danger by going on a road trip without protection spreads Dimilioc thin. And basically all Hell breaks loose in more than one place and threats are everywhere. It is an action-packed thrill ride from start to finish and I could not put the book down. I love all these characters and thoroughly engrossed in their lives and the story unfolding. There are a lot of unanswered questions still as there is another three books yet to come, but this one ends in a satisfying way. (Though I still can't wait for the nest book.)

I read an ARC sent to me by Rachel Neumeier.

Anonymous said…
I also can't wait to read the next book. Where is it, Rachel?? Haha really enjoyed this one. Like you said, I couldn't put it down and just kept reading until the end. The Ezekiel bits were also my favorite and although I liked how his relationship with Natividad progressed, I still wanted more scenes of the two of them together.
June 12, 2015 at 6:07 AM