June 03, 2015
Valiant by Sarah McGuire has so many elements I love in a book: fairy tale elements, a brave yet flawed heroine, a determined hero, kingdom politics, and a land in peril. There was so much I enjoyed about the book. (Not the least being I actually read a book I liked! After weeks of hating everything.) 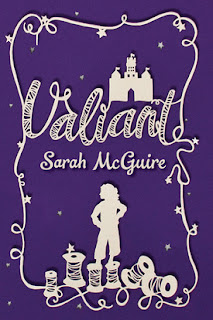 Saville has always known her father loves the fabrics he sews as a tailor more than he's ever loved anything or anyone else including her. She resents those fabrics, her father's trade, and the life they've led her to in Reggen. She is determined to escape as soon as she can. When her father has a stroke shortly after their arrival, Saville sees her opportunity for escape disappear. In order to save them from destitution, Saville makes a dangerous gamble disguising herself as a boy and gaining a commission from the King himself. But Reggen is a city on the verge of disaster. Reports are coming in of an army of giants razing towns and leaving no survivors, led by a dangerous human Duke claiming he is the rightful Emperor. Saville is skeptical until her young errand boy finds himself captured by two scouts larger than the oak trees they stand next to. In a daring game of trickery, Saville convinces them she has greater strength and finds herself the champion of the city-a position that comes with it the hand of the princess. When the King and his advisors discover her true identity, she is kept at the palace half prisoner and half assistant to Galen Verras, the cousin of the king and only person in the castle actively working on a solution. Together Saville and Galen make startling discoveries about their foes and make great sacrifices to save the city and the people they love.

Saville is my favorite type of heroine. She is brave, smart, hard working, and loves with all of her heart. She is also scared, impetuous, and hurt by her father's attitude toward her. I love how she came up with such a daring plan to save her and her father, but was actually not all that great at pretending to be a boy. I also adored how she was unable to suppress her compassionate nature and was moved to help people even when it might have been wiser for her to retreat. Galen is a wonderful complement to her. He is also intelligent, brave, and hard working. He can sometimes be too cautious though and this balances well with Saville's utter lack of caution at times. I enjoyed his complicated relationship with his royal family members as well.

The supporting characters are interesting and add a lot to the story as well. The king, the princess, and the young boy Saville saves (Will) all have important roles to play and are layered characters. There are also fascinating dynamics at work in the camp of the giants. The villains are little one note and predictable, but given the fairy tale style of the story that works okay.

Saville's story gripped me from the beginning. It was interesting to see her character react to the challenges she faced as each new life altering event occurred. Once she was in the castle, things slowed down a bit. I did like the slow development of the relationship between Saville and Galen, but felt this part of the novel dragged overall. The end sees the excitement reach new heights though and I adored how it all resolved.

On the whole this is a fun book which is why I enjoyed it so much. The sentence level writing is not the best at times. There are a lot of unnecessary run on sentences and stock phrases that tend to drive me crazy used. (Including the ever annoying: "I released the breath I didn't even know I'd been holding.") Still this is a great book to give fans of fairy tales, adventures, and for those who like a dash of romance.

I read and ARC made available by the publisher, Egmont, at ALA Midwinter. Valiant is available for purchase now.