October 13, 2016
The Firefly Code is my favorite book Megan Frazer Blakemore has written yet. 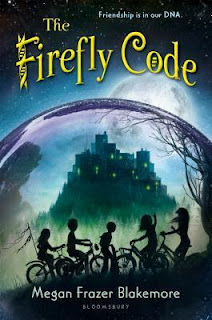 Mori, Julia, Theo, and Benji live in Old Harmonie-a small village started by Mori's great grandmother and her friend. It was meant to be a community fostering imagination, creativity, and cooperative living. Decades later it is one of many Utopian towns across the globe run by a corporation. These towns are cut off from the larger chaos of the diseases, storms, and crime of the outside world. The children in the communities are given "enhancements" to help them become their best selves with the understanding they will take their place working for the company as their parents did. The four friends live on Firefly Lane. When Ilana moves onto their street, she and Mori become close quickly. But it soon becomes clear that not all is as it seems with Ilana or the perfect world the Firefly Five are growing up in.

The Firefly Five. I love these five kids. The story is told from Mori's first person point of view, but all five kids are incredibly important. The four original occupants of Firefly Lane are a cohesive team, each with their place and talent. Mori loves plants and is curious about everything, though not recklessly brave. Theo loves solving puzzles and his recent surgery to bring out his "latency" has only made him a better strategist. Beni is a tech genius and athlete, incredibly good at a number of things. Julia is the ultra-completive, athletic one. Ilana comes into their world and brings with her disturbance changing the dynamics of the group. Mori and Ilana instantly bond making Julia jealous. It doesn't help that Ilana is beautiful and pretty much good at everything. Theo is concerned about Mori. Benji just wants to keep peace and skateboard. The dynamic between the five of them captures the middle school friend group so well. They are all eager yet frightened by the prospect of forging their own independent futures while desperately clinging to the bonds of community and friendship they have. Just their friendship alone is enough to make this excellent MG fare.

The world here is a fascinating one. Set in a not so distant future, there are several elements about the world that are close enough to our own to make it familiar and all too plausible a possibility. Blakemore did an interesting thing with the community. It's not terrifying. It's not a dystopia. But there are things going on that are not entirely good. It makes the stakes interesting. Because if the kids rebel, it's not as though they are rebelling against an evil force. It brings up some interesting ethical issues that need to be thought about, and it presents them in a way the intended audience will understand. The book is fast paced and hard to put down. There is a certain mystery to the story that holds the reader until the end.

I found myself not wanting to leave the world or the characters. I would be really happy to discover a sequel. It doesn't need one. I just want one.

Kim Aippersbach said…
Huh. Why have I never heard of this author? This book sounds really interesting: a premise that could have been clichéd but veers off from the predictable. (Not a dystopia, you say? Sign me up!) And who doesn't love a good friendship story.
October 16, 2016 at 11:13 PM