October 21, 2016
Pinocchio has never been a favorite of mine. Not the original novel. Not the Disney movie. In The Wooden Prince, John Claude Bemis retells this old story in a way that works for me as it never had before. 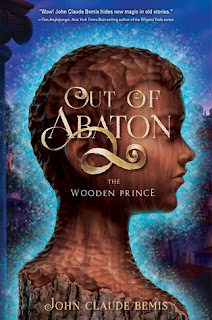 Pinocchio is an automa who serves in the doge's palace until he is stuffed in a box and sent to the alchemist Geppetto. As soon as he is placed in the box, Pinocchio begins to change. He feels. Automa are not supposed to feel. He is soon united with his new master who has been declared a traitor to Venice and is in hiding. Together Pinocchio and Geppetto must try to escape the soldiers chasing them and figure out why Pinocchio is changing from a wooden automa into a real boy. Before they can get far, they are separated and have to endure many trials to reunite, solve the mystery, and save a magical kingdom.

The Wooden Prince is a steampunk fantasy that takes place in Venice and references many real world places. The structure of the plot follows the original story in many ways. There are scenes that will be familiar to those who know Pinocchio. Bemis included all the iconic moments. What he did that I liked was change the the thematic presentation up a bit. It is about community, friendship, family, and sacrifice. There is also an exploration of what it means to be real and alive. Beyond that, Bemis just made the plot more fun. There is a lot of action and it is fast paced.

The fast pace of the plot makes it hard to connect on a deep level with any of the characters. The are also quite a few characters to get to know. However, Pinocchio is one I was invested in. I had a discussion with some people on Twitter a few months ago about how difficult it is to make inanimate-objects-come-to-life have real stakes. Bemis manages that here and manages it beautifully. This ties into the themes brilliantly too. The books is peopled with a cast of human and magical characters that do add to the story even if they're characterization is not filled out well. Maestro, the tiny sarcastic musical cricket, adds a subtle humor. Pinnoccio befriends chimera in the forms of different animals and the fairy daughter of a magical immortal king. All of these combine to make the story both familiar and brand new.

I can see this appealing to kids who love anything that reminds them of Disney (it is published by Disney-Hyperion) or are just into magical tales with animal/human friendships.