June 27, 2012
The newly re-released Dogsbody by Diana Wynne Jones was one of the books I bought with my birthday giftcards. I didn't even bother to learn what it was about. It was written by Diana Wynne Jones and that was enough for me, even if it was going to be about some hapless person trapped in a dog's body (my assumption-not what it's actually about). 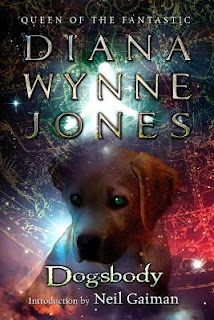 The Dog Star, Sirius, is tried - and found guilty - by his heavenly peers for a murder he did not commit. His sentence: to live on the planet Earth until he can carry out a seemingly impossible mission - the recovery of a deadly weapon known as the Zoi. The first lesson Sirius learns in his lowly earthly form is that humans have all the power. The second is that even though his young mistress loves him, she can't protect either of them. The third - and worst - is that someone out there will do anything to keep Sirius from finding the Zoi. Even if it means destroying Earth itself.

Diana Wynne Jones can do anything and make it work. I'm convinced of it. Don't particularly like dogs? Don't particularly enjoy stories with animals? No matter. If she writes it, it will be readable.  Not just readable, but enjoyable in ways you couldn't have imagined. She managed to make star trapped in a dog body believable. What is more she wrote what I imagine the inner life of dogs to be so well I suspect she actually conversed with some.
Kathleen took off the leash and Sirius bounded away, jingling and joyful, into the damp green grass. He ranged to and fro, rooting and sniffing, his tail crooked into a stiff and eager question mark. Beautiful. Goluptious scents. What was he looking for in all this glorious green plain? He was looking for something. He became more and more certain of that. This bush? NO. This smelly lump, then? No. What then?
Doesn't that just evoke puppy? And isn't galuptious the most perfect word?  As  much a puppy as Sirius can be, he is also very much a Luminary still. His frustration with his puppy form and how his dog sense clouds his greater senses raises the tension in the story considerably. The way Luminary Sirius perceives the world is told in equally appropriate ways, just as perfectly worded.
Space sang. There were great slow notes, high sweet sounds-every note in human music and more beside, all winding, twining, combining, and ringing solemn and single, like a constantly changing tune.

There are many other characters, all of whom leave an impression. That is one of the reasons I love DWJ's books so much. She writes interesting and engaging characters, no matter how small a role that characters has. The relationship between Sirius and Tibbles the cat was probably my favorite thing about the book.

While not my among my favorites of DWJ's novels, I enjoyed Dogsbody very much and have a feeling people who truly love dogs would enjoy it even more.

Heidi said…
Knowing something's by Diana Wynne Jones is good enough for me as well! Just finished Castle in the Air myself a couple of days ago. =)

I love that this copy has an intro by Neil Gaiman, because when I read your description of the book, I was thinking it seemed Stardust esque. And this does sound like it invokes a puppy! I will certainly be checking it out down the road.
June 27, 2012 at 11:31 PM

Brandy said…
I thoroughly enjoyed Castle in the Air when I read it.

Yes! Neil Gaiman was the perfect choice to write the introduction for this one. I really hope the three released books sell well. Maybe we will get more of her boos released in the US.
June 28, 2012 at 1:41 PM