July 09, 2012
I was a little hesitant to pick up Above World by Jenn Reese despite the numerous glowing reviews and comments for it I had read. It sounded dystopian, and I don't like dystopian. Finally all the praise had me curious enough to pick it up. (Also it has a beautiful cover.) Yes, it does have some shades of dystopian, but this is a book that is so much more than that. Reese sets her story in a futuristic world that is so foreign that it could be another world entirely. Into this she added myths and legends for the peoples she created. All of these elements combined with engaging characters to make an adventurous tale of bravery, loyalty, and friendship. 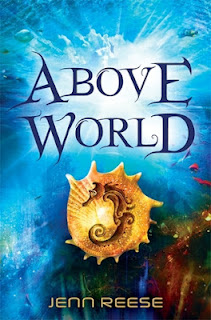 Synopsis (from Goodreads):
Thirteen-year-old Aluna has lived her entire life under the ocean with the Coral Kampii in the City of Shifting Tides. But after centuries spent hidden from the Above World, her colony’s survival is in doubt. The Kampii’s breathing necklaces are failing, but the elders are unwilling to venture above water to seek answers. Only headstrong Aluna and her friend Hoku are stubborn and bold enough to face the terrors of land to search for way to save their people. But can Aluna’s warrior spirit and Hoku’s tech-savvy keep them safe? Set in a world where overcrowding has led humans to adapt—growing tails to live under the ocean or wings to live on mountains—here is a ride through a future where greed and cruelty have gone unchecked, but the loyalty of friends remains true.

I was extremely impressed by the world building. Extremely. Reese created a future world in which pockets of humans submitted to technological changes in their biology to adapt them to live in places humans normally couldn't inhabit. High altitudes, the desert, underwater. Centuries have passed since the pioneers of these colonies started them. Their descendents are reliant upon the technology that changed them and now that technology is failing. From the underwater home of Aluna and Hoku to the sky residence of the Aviars to the wild forests of the land, Resse did a phenomenal job describing them all and bringing them to life.  She also gave just enough background to make the place believable and to demonstrate the motivations of those long ago pioneers who brought this world into being. I found it particularly interesting that, while this is a futuristic story and the civilizations in it rely on extremely advanced technology and science, the pocket groups that live in the various places have developed their own myths and legends for their people over the intervening centuries.

Aluna and Hoku are contrasting characters, and this story  belongs to both of them. Aluna is a brave warrior who often leaps in before she thinks. Both in action and words. Hoku is cautious and strategical in what he does often to the point of inaction. Together they make a great team because they force each other to be less extreme in their personalities. Aluna's leaving Coral Kampii causes Hoku to leave as well. He may never have been moved to action but for her rebellion. At the same time Hoku's critical thinking saves Aluna from her own reckless heroics more than once. I loved this part when they were being pursued and cornered by enemies:
"Then I'll stay," Aluna said. Besides if anyone was going to sacrifice herself for the greater good, it was going to be her.
"How about none of us stay," said Hoku.
He then proceeds to create a distraction that enables them to escape. This short interaction perfectly sums up both of them and how they work as a team. I really enjoyed the fact that their relationship was 100% a friendship. Not that there is no hint of romance. There is, just not between the two of them. They meet in their journeys Calli, a young Aviar, and Dash, an exiled Equine, who provide them with romantic interests. I felt this was yet another strength of the novel. This is a MG novel and the characters are 12-13 (Dash may be a little older-I'm not sure) and Reese did an excellent job of describing the innocent giddy stirrings of young love and-all its confusion-experienced at this age:
She hobbled over and sat a foot or so away from Dash, close enough but not too close. At least that's what she hoped he would think. Had he wanted her to sit closer?
and
He sat next to Callli, grateful that she never seemed to mind. Her hand rested on the ground just  a few millimeters from his. And yet...those millimeters meant everything. Would he ever be brave enough to cross that distance.
These feelings of young attraction and romance are kept to a  minimum and never overshadow or detract from the greater conflict playing out. And Calli and Dash are both interesting characters with fascinating backstories in their own rights, separate from their romantic functions. They are both important members of this team that has formed and bring their own strengths to the quest to save the Kampii.

The conflict faced by Aluna and Hoku started out small as the world they came from, and grew bigger as their world grew bigger and they realized the importance of needing and working with others. There is a lot of food for thought about ethics in technology and bio-engineering here. The story does not force this on the reader, but a thoughtful reader will certainly have much to chew on after reading this.

Most of all it is an enjoyable adventure about kids who are brave enough to challenge their world and fight for the future and hope.  I'm very excited to see where the story will be going in the second book, which is called Mirage and is expected to be published in 2013.