July 03, 2012
All I knew when I went into Seraphina by Rachel Hartman was that it was a book with dragons. Imagine my delight when I began reading and discovered that the book had plenty of other elements to love. Mystery. Political Intrigue. Awesome Heroine. Yes, this book has all of that. Plus the dragons.  I haven't read a high fantasy I enjoyed this much in a looooong time. 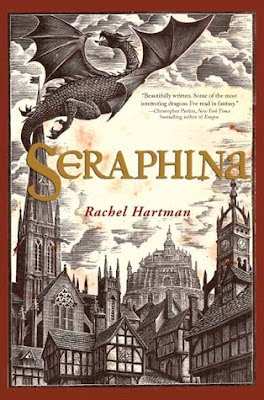 Synopsis (from Goodreads):
Four decades of peace have done little to ease the mistrust between humans and dragons in the kingdom of Goredd. Folding themselves into human shape, dragons attend court as ambassadors, and lend their rational, mathematical minds to universities as scholars and teachers. As the treaty's anniversary draws near, however, tensions are high.
Seraphina Dombegh has reason to fear both sides. An unusually gifted musician, she joins the court just as a member of the royal family is murdered—in suspiciously draconian fashion. Seraphina is drawn into the investigation, partnering with the captain of the Queen's Guard, the dangerously perceptive Prince Lucian Kiggs. While they begin to uncover hints of a sinister plot to destroy the peace, Seraphina struggles to protect her own secret, the secret behind her musical gift, one so terrible that its discovery could mean her very life.

The world building here is excellent. There are several countries being dealt with that have a complex history. They have a religious system (also complex) and an intricate class structure. None of this is explained to the reader, the story is simply rich with the details of the world the characters live in. There is a bit of explanation given here and there, but the way Hartman wove these parts into the story made sense in the narrative and worked for the characters. The concept at the heart of the story is unique and interesting. After years of war dragons and humans have a fragile peace that has lasted 40 years. The dragons take human form and are permitted to live among the humans. The rules are strict on this and some dragons are better at "passing" as humans than others. Some are so remarkably good at it they form forbidden ties with humans and no longer wish to assume their dragon form. The peace is a fragile one because many of the dragons who fought in the wars are, of course, still alive. And there are humans keen to stoke the embers of fear and hatred for the "beasts" who killed their grandparents in their fellows. There are interesting themes explored through this of what humanity is and it how it operates. I found the contrast between the dragons' lack of emotional connection, the idea that they were beyond such things and therefore above humans, and the human's belief that the dragons lack of emotion meant they were all heartless and bloodthirsty to be interesting.


Of course the important thing in all of this is the people it's affecting. Our characters, most importantly Seraphina. I really loved Seraphina's voice and empathized with her from the first. Her story starts out slowly and she is not forth coming with details. At the beginning of the book Seraphina is a girl in conflict. She has secrets she is ashamed of and must hide. She is lonely, and thinks alone is what is best, and yet she craves companionship. Her walls are up. As the story progresses and she begins to make connections with the people around her her story also opens up. The book really is the process of getting to know her. This one girl who is "prickly" (as the Princess calls her). There were many aspects of Seraphina's character I appreciated. She is not rash. She tries to think every situation through. She manages to avoid most unpleasantness by trying to tell as much truth as she can. At the same time she is crafty, using other people's assumptions of her and situations to gain the advantage she needs in to do what she must in the moment.


Seraphina comes with a whole host of fascinating supporting characters as well: her father, Kiggs. Orma, Dame Okra, Lars, Viridius, Abda, Estar, Princess Glisselda, Comonot, These characters are royalty, musicians, acrobats, dragons, and all interesting in their own right. To top it all off there is a fascinating villain and they are never sure exactly where or how he is operating.


The story is action packed and the last 100 pages or so are nail biters.


I do believe there will be more to come of this world and its characters. The end certainly seems to set that up. At the same time I would be satisfied with the questions left unanswered and the ending just as it is. Hartman struck the perfect balance here.


This is one of my favorite reads so far this year and I highly recommend it to anyone who enjoys good stories of intrigue or is looking for an inventive take on dragons.

I read a copy most excitedly received from the publisher via NetGalley. Seraphia is on sale July 10.

Charlotte said…
oh goodness my expectations for this are just getting higher and higher!
July 3, 2012 at 3:40 PM

Chachic said…
I have heard nothing but good things about this title. It keeps popping up in everyone's list of 2012 favorites! I'm still disappointed that I was denied when I requested it on NetGalley but at least it's being released soon. I just hope local bookstores ordered copies of this.
July 3, 2012 at 11:25 PM

Charlotte said…
Having now read it myself, I came back to properly read your thoughs--I also loved how the book and Seraphina both opened up in tandem!
August 11, 2012 at 1:00 PM