July 19, 2012
Dragonswood by Janet Lee Carey is a book about a kingdom in strife. With faeries. And dragons. OF COURSE I wanted to read it. I rather enjoyed it too. 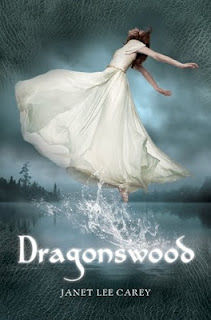 Wilde Island is in an uproar over the recent death of its king. The uneasy pact between dragons, fairies, and humans is fraying and the royal witch hunter begins a vengeful quest to hunt down girls with fire in their hearts and sparks in their soul.
Strong-willed Tess, a blacksmith’s daughter from a tiny hamlet near the mysterious Dragonswood, wants more for herself than a husband and a house to keep. But in times like these wanting more can be dangerous.
Accused of witchery, Tess and her two friends are forced to flee the violent witch hunter. The journey is bleaker than they ever imagined and they have no choice but to accept when an enigmatic huntsman offers them shelter in the dangerous Dragonswood. Staying with him poses risks of its own: Tess has no idea how to handle the attraction she feels for him—or the elusive call she hears from the heart of the Dragonswood.

Dragonswood doesn't do anything with faerie or dragon lore that hasn't already been done, but it does do it all well. I liked the history of the ruling family and their connection with the dragons. The dragons in the book are the most interesting characters even though they aren't in it much. The faerie folk are exactly as they should be for a story with this setting. I liked that. I liked that the world I was in felt familiar and like I knew the rules. It was comforting.

Tess was a difficult character for me to connect with, but she was one I could sympathize with. Terrible things have been done to her. She carries a burden of guilt for dragging her friends into a terrible mess. Garth, the huntsman, is a fascinating love interest for Tess. I would have liked a bit more sizzle in their relationship, but the lack of it coincides with Tess's insecurities, fears, and unwillingness to acknowledge her feelings.

Tess's friends, Poppy and Meg, provide good foils for her and bring out more of her character though don't add much in their own right. I loved that Meg was married and had a toddler. The time period for the book is the 12th century and this was realistic.

The way the witch hunt unfolds is also realistic, showing how the mob mentality works and how people can be made to turn on their friends and neighbors.

I would recommend this to anyone who is looking for a good solid fantasy read. The author wrote a previous book that takes place in the same kingdom called Dragon's Keep. You don't have to read it to read this one. I hadn't read it, but I will now.