A Tale of Time City

July 17, 2012
I will write it again: Diana Wynne Jones is a genius. Really was there any limitation on what she could write? Her ability to bring to life all manner of ideas from her most amazing mind leaves me awestruck. A Tale of Time City, I confess, is not my favorite of her books. Still. Saying one of her books doesn't live up to its fellows still puts it above almost everything else out there. 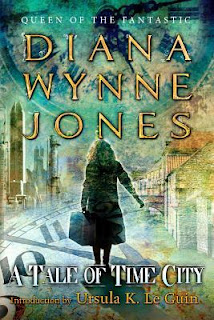 Time City is built on a patch of time and space outside history. It is full of wonders and haunted by "time ghosts," but it is nearly worn out and doomed to destruction.
In September 1939, Vivian Smith is on a train, being evacuated from London, when she is kidnapped by two boys from Time City, Jonathan and Sam. They mistakenly think she is the mysterious Time Lady disguised as a child. Only the Time Lady can wake the founder of the city, Faber John, from his age-long sleep, and only he can save the city.
Vivian wants to get home; Jonathan and Sam want her to help them in their quest through the ages of history to save Time City. Meanwhile, someone seems to be tampering with history, changing it over and over, complicating everything. When Faber John is at last aroused, Time City's and Vivian's dilemmas are resolved in ways that are as satisfying as they are unexpected.

Some of my aloofness toward this book may come from my love/hate relationship with time travel stories. (love=Connie Willis; hate=end of Prisoner of Azkaban)  There was a lot in the underlying concept about time travel that reminded me of Willis so it definitely falls more toward that end of the spectrum.  There just seemed to be way more details given at times, and not enough at others. That is never a complaint I have had about DWJ novel before. The end also wrapped up FAST.

However, I did enjoy the characters, particularly Vivian and Jonathan. I loved the way all three of the kids interacted. Sam and his obsession with butter pies was endearing, as was his typical 8 year old behavior despite being a genius. (By the way: I really want a butter pie now despite not having a clue what one is. DWJ's writer skills at work.) I always enjoy these sorts of stories where the kids have to band together to save the day because the adults are running around pretending nothing is too amiss. I liked how the kids ended up messing up as much as they saved and that there were going to be consequences (though none too horrible) mixed in with their rewards.

When I ordered the re-released DWJ titles I was expecting to like this one more than Dogsbody, but that turned out to not be the case. I like it that the books can still surprise me. This is a vastly entertaining read and, I think, one that would probably appeal more to the MG reader.