Lizzie Bright and the Buckminster Boy

August 06, 2012
Lizzie Bright and the Buckminster Boy is Gary Schmidt's much lauded novel that won not only a Newbery Honor, but a Printz Honor as well. It was published in 2004 coming before both The Wednesday Wars (my review) and Okay for Now (my review). It is unrelated to the other two in plot and setting, but very much similar in style and voice. Schmidt just excels at this type of story. 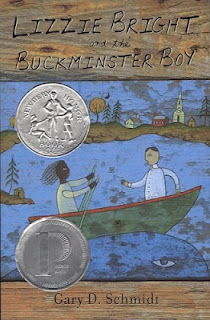 It only takes a few hours for Turner Buckminster to start hating Phippsburg, Maine. No one in town will let him forget that he's a minister's son, even if he doesn't act like one. But then he meets Lizzie Bright Griffin, a smart and sassy girl from a poor nearby island community founded by former slaves. Despite his father's-and the town's-disapproval of their friendship, Turner spends time with Lizzie, and it opens up a whole new world to him, filled with the mystery and wonder of Maine's rocky coast. The two soon discover that the town elders, along with Turner's father, want to force the people to leave Lizzie's island so that Phippsburg can start a lucrative tourist trade there. Turner gets caught up in a spiral of disasters that alter his life-but also lead him to new levels of acceptance and maturity. This sensitively written historical novel, based on the true story of a community's destruction, highlights a unique friendship during a time of change.

The story centers around an event that actually happened in  Maine history. What Schmidt did was come in and give the young girl found in the historical accounts a name, a personality, and a history. And he gave her a friend. Both Lizzie and Turner come to life as the story unfolds. You want them to be real. You want them to win. Even though you know the whole thing is heading toward the exact opposite. There's no other way it can go. I read this with a feeling of trepidation. I'm a girl who knows her history and there was no way this was ending in the manner of Schmidt's other books. But dang if Schmidt didn't still manage to bring in a thread of hope and redemption in the midst of what is a truly tragic story. This is why I love his books. This and the way Schmidt has with words. He creates real people with them, whole towns of them, your convinced have to actually have been there.

In this, as in all of his other books the writing speaks for itself. So here you go. If this doesn't make you want to know these people, nothing will:
"Lizzie Bright Griffin, do you ever wish the world would just go ahead and swallow you whole?"
"Sometimes I do," She said, and then smiled. "But sometimes I figure I should just go ahead and swallow it." And she held her arms out wide, as if she would gather it all in. And for a moment, Turner had no doubt that she could.

"This the boy never talked to a Negro before?"
Lizzie nodded. Tuner nodded, too. He thought Lizzie's grandfather must be older than Methuselah. He looked like a white-haired, fiery-eyed, God-haunted Old Testament prophet without the robes.
"How's he doing now?"
"Fair to middling."
"Fair to middling," her grandfather repeated. "Let's see, then. Boy, why don't you go ahead and say something?"
Turner had no notion of what to say to an Old Testament prophet. He thought they were all dead.
"Maybe not quite middling." said Lizzie's granddaddy.
Turner opened his mouth and shut it agin.
"Maybe not quite fair..."

"I wonder," said Tuner slowly, "if it's only the folks on Malaga Island who can make you think what they want you to thin."
"So now you're impertinent too."
Turner stood and it suddenly seemed to him that his father was much smaller than he had been before. There simply wasn't as much of him as he remembered.

"Turner," he said, "books can be fire, you know.."
"Fire?"
"Fire. Books can ignite fires in your mind, because they carry ideas for kindling, and art for matches."