August 16, 2012
Shannon Hale's Newbery Honor winning book Princess Academy was what made me start reading her books. I loved Miri, the girls at the academy, and the people of  Mount Eskel. It is the sort of book that gets into your head and heart. I have a great deal of affection for Hale's Books of Bayern as well. I was so very excited to discover we were getting a sequel to Princess Academy. I had never really longed for a sequel, content to let my imagination complete Miri's story, but was delighted to learn there would be one. As soon as I had the opportunity to read Palace of Stone I grabbed at it. 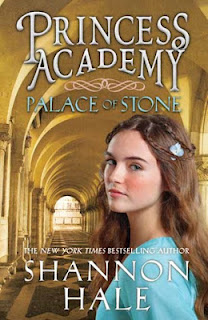 Coming down from the mountain to a new life in the city seems a thrill beyond imagining. When Miri and her friends from Mount Eskel set off to help the future princess Britta prepare for her royal wedding, she is happy about her chance to attend school in the capital city. There, Miri befriends students who seem so sophisticated and exciting . . . until she learns that they have some frightening plans. They think that Miri will help them, that she "should "help them. Soon Miri finds herself torn between loyalty to the princess and her new friends' ideas, between an old love and a new crush, and between her small mountain home and the bustling city.

Palace of Stone finds Miri, Esa, Liana, Frid, Gerti and Bena traveling to Asland to witness Britta's marriage to the prince. Peder goes as well to spend a year training as an apprentice to a master carver. Katar is, of course, already there as the Delegate to the Court. The girls are thrown into the thick of the intrigue and discontent roiling in the Court and city on their very first day there. Things are bad and the word revolution is being tossed around with alarming frequency. Alarming for someone like Miri who is trying to adjust to life away from her simple mountain for the very first time and whose best friend is about to become the princess.

At first I had a hard time falling into the rhythm of the story. I was frustrated with Miri. OF COURSE the revolutionaries were using her and not to be trusted. That seemed obvious and I remembered her being smarter than that. However, I came to adjust my thinking as I remembered how wide eyed and innocent she was to the city and the ways of people she hadn't grown up knowing all her life. Hale makes Miri's confusion  and naivete believable. I really enjoyed watching her grow and learn. This is a different sort of growth than she experienced before. This is one that comes from disillusionment and a realization of how complex the world is. The conclusions Miri reaches and the choices she makes are ones I could understand. She is a little too much the ultimate heroine again though, and that I had a harder time swallowing.

Which brings me to what makes me feel so ambivalent towards this book. This is a country with some serious problems that have been ignored for far too long by a King who is far too distant from his people. The revolutionary movement is pretty far gone. Mobs take to the streets at one point. The storming of the prison is nigh, the guillotines are being readied, the knitting needles are coming out. (Yes it's that bad.) The resolution too all that tension was a little too neat for me, and far too dependent on the special girls from Mount Eskel (and quarry speech again). It was too dramatic, and at the same time far too simple, for the issues at stake. What worked in the smaller context of the first book didn't get the job done for me in the wider context of the second.

This is a good read and those who love Miri will be unable to resist reading her story further. Reactions may be mixed. Mine was, though I'm sure many people will love being with these characters again no matter what.

Palace of Stone will be available in stores on August 21. I read a copy provided to me via NetGalley.

Amy said…
I've been anxiously waiting all summer to read this book! Just a few more days! I wonder if I'll feel the same way you did though. I tend to not love it when just a few (young) characters are able to save the entire world...just a little unbelievable. :-)
August 17, 2012 at 5:11 PM

Brandy said…
I anxiously awaited it too! It was definitely nice just to be with familiar characters and I still loved Miri. There were some definite Kumbaya type moments that had me saying really?? though.
August 17, 2012 at 7:41 PM