August 20, 2012
Splendors and Glooms was one of those books I read because I felt like I had to. It was written by Newberry Award winning author Laura Amy Schlitz and I like her stuff. I do not like Victorian Fantasy though, and those words were being thrown about enough in conjunction with this book to make me groan. I think it would be more accurate to call this a fantasy that has a Victorian setting. When I think Victorian Fantasy I think Alic in Wonderland or Peter Pan, and this has more of a Diana Wynne Jones feel to the story. In fact, if you have read Jones's The Magicians of Caprona you might recall (how could you not?) that there were some super creepy scenes involving puppets. This book works on the same sort of concept. And is for sure certain creepy. Wonderfully creepy.

Synopsis (from Goodreads):
The master puppeteer, Gaspare Grisini, is so expert at manipulating his stringed puppets that they appear alive. Clara Wintermute, the only child of a wealthy doctor, is spellbound by Grisini’s act and invites him to entertain at her birthday party. Seeing his chance to make a fortune, Grisini accepts and makes a splendidly gaudy entrance with caravan, puppets, and his two orphaned assistants. 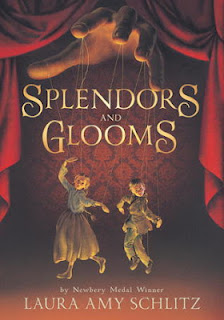 Lizzie Rose and Parsefall are dazzled by the Wintermute home. Clara seems to have everything they lack — adoring parents, warmth, and plenty to eat. In fact, Clara’s life is shadowed by grief, guilt, and secrets. When Clara vanishes that night, suspicion of kidnapping falls upon the puppeteer and, by association, Lizzie Rose and Parsefall.
As they seek to puzzle out Clara’s whereabouts, Lizzie and Parse uncover Grisini’s criminal past and wake up to his evil intentions. Fleeing London, they find themselves caught in a trap set by Grisini’s ancient rival, a witch with a deadly inheritance to shed before it’s too late.

The story here is a complex one with a large and varied cast of characters. The action centers around the disappearance of Clara Wintermute following her birthday party and moves from London town house to London slum to large country estate. Suspicion over Clara's disappearance is focused on the puppet master Grisini but then he disappears too. As do his two young wards. Clara's parents are distraught as she is their only surviving child.

All of this action centers on the three children. Impossibly good  Lizze Rose only wants to ensure that there is shelter and food for her and Parsefall while also always doing what is right. Parsefall is far more interested in survival by means fair or foul. He is not evil, just not above breaking the law to ensure he eats. Then there is Clara, suffering from a massive guilt complex and repressed emotions. Clara and Parsefall are also brave and strong minded. I would have preferred the story focused more on the two of them and less on everyone else. (Particularly Lizzie Rose who I frequently wanted to shake and tell to shut up.)  Cassandra, the witch who desires to use the children for her own means, was also fascinating. I really liked what Schlitz did with her character. Grisini is a perfect villain for the gothic horror of the plot. Smarmy to the core, violent in a fantastical way, he is scary enough to give a young reader the shivers without subjecting them to hideous nightmares. And he meets such a satisfying end.

There were places where the story dragged a bit. Mostly when focusing on Clara's parents and Mrs. Pinchbeck. These scenes were short and few though.

This is an excellent selection for readers who enjoy the ghoulish, but shy away from the outright horrific.

I read a copy available via NetGalley. Splendors and Glooms will be released August 28.