December 22, 2014
Alistair Grim's Odditorium by Gregory Funaro is a mixture of magic and mystery with a whole  lot of adventure and familiar aspects fantasy lovers will recognize. 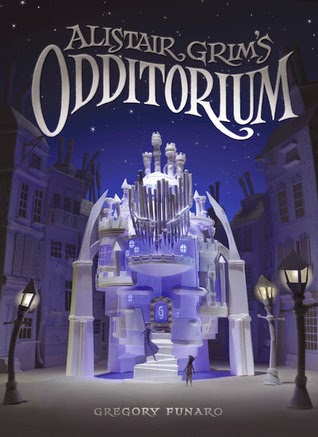 Grub was raised by the wife of chimney sweep. He has no idea who is true parents are. When the lovely woman who has been the only mother he's known dies, his life becomes a drudgery of work as the sweep's apprentice. One day after a making a mess while being bullied Grub knows he has to run and he hides in the trunk of a mysterious stranger. Upon arriving at the stranger's house, Grub is discovered and finds himself in the position of keeping strange secrets, living in an odd house, and being beholden to the mysterious stranger named Alistair Grim. Grim has a collection of objects he calls odditoria that possess magical properties. These items fuel the energy the home runs on, but the magic is dangerous and could attract exactly the wrong sort of notice. When Grub accidentally allows some  of the magic out into the world, this is exactly what happens. Now the Black Fairy, shadesmen, and the malevolent Prince Nightshade know the Odditorium exists and they are coming after its inhabitants. Fleeing for their lives and engaged in an epic battle, Alistair Grim and Grub both have decisions to make about what is truly important and many secrets will be revealed.

There is a lot going on this book and it is quite long. The plot is an intense one with a lot of action sure to please fans of adventure. There are many places where the action comes to a complete halt so that Alistair Grim can have lengthy conversations with various other characters in which he talks and talks and talks and explains. And explains some more. Some exposition is always necessary when introducing an audience to a new world, but I feel like there are better ways to do it that don't bring the action to a screeching halt every thirty pages or so for an info-dump clumsily discussed as a conversation. These parts slow the book down, and became annoying the further I read. Despite these parts, I was pulled into the story's more exciting elements and continued to read to the end. The tempered my enjoyment, but didn't entirely kill it. There was enough intrigue and fascinating elements that I definitely wanted to get all the way to the end.

I did enjoy the characters. Grub is a little too trusting of everyone, and follows a typical fantasy arc, but he is a likeable hero and does many brave things. Alistair Grim is unpredictable and full of energy, driven by a haunting past and bordering on obsessive. Despite all this, I found him to be rather uninteresting. Maybe it's because of the exposition he's always doing. It is the larger supporting cast of characters that truly captured my heart. I won't say much more to avoid spoilers, but the other inhabitants of the Odditorium are the fascinating ones. I loved them all.

For fans of fantasy who aren't intimidated by long books, this is this perfect choice.

I read a galley provided by the publisher, Disney-Hyperion, via NetGalley. Alistair Grim's Odditorium will be available for purchase January 6.