The Love Stories I Trained On

December 15, 2014
Last week on Twitter Christina of A Reader of Fictions tweeted about how she is far more interested in couples who bicker and banter a lot than those are always nice and considerate of each other.

Yes. Yes. And yes. I have always felt this way. It's why I've never understood Harry/Hermione shipping. It baffles me. I think that relationship would be such a snoozefest. (To each his or her own, I guess.) But the fact of the matter is I LOVE a good romance fraught with tension and challenge. They make my  heart soar.

A few minutes later Christina posed an interesting question: "What were the ships that trained your shipping heart?"

Little did I know the path of self-discovery she was about to send me down because I had never really thought about it. I answered her question merely in terms of book shipping, because I don't take in a whole lot of other media. Books are my thing. They're what come to mind first. So I thought of my earliest book ship, which was this:

And let's remember that even after years, they were still all: 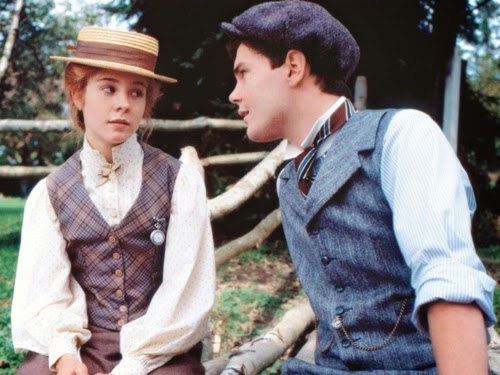 This is the type of romantic progression that makes my heart sing with joy. I was in 5th grade when I started reading the Anne of Green Gables series. I was in late 6th/early 7th grade when I first saw the movies. And then they were watched so many times I went through more than one copy.

In late 8th grade I read a little book that introduced me to my next great obsession:

If Anne and Gilbert kindled my appetite for hate to love romance, Lizzie and Darcy only made me hungrier for it, and made me realize how wonderful well written banter could be. How it could inspire one's mind. Obviously, if a potential romantic partner can't do this with you, they are not worth considering.

The banter thing was further solidified in high school by:

I loved Beatrice and Benedick. After seeing this movie, I actually went out and bought a copy of Much Ado About Nothing so I could reread all their parts.

There I thought I had them all. The ships that formed my taste in romance forever. But then Christina tweeted yet again. This time about the awkwardness people who shipped Luke and Leia must have felt when they discovered they were tricked into incest shipping. And then it hit me.

THIS was really my first ship:

I was two years old when The Empire Strikes Back came out and five when Return of the Jedi came out, so maybe it was due to never really thinking Luke/Leia was possible. I think it is more that I was really always just a Han girl. I even had a little stuffed Chewy to make my Han make believes complete. (I took him with me to see Return of the Jedi in the movie theater. He sat on my lap.)

Anyway, as this hit me I realized it explained A LOT. I never really thought about how something I loved so much prior to my being able to read affected my tastes in reading, but, wow, did it ever! Han is the type of hero I prefer in books: the outwardly lazy and careless arrogance that covers up some significant insecurities and uses snark as a shield. Pair that hero up with a smart, determined girl who is willing to (and often does) call him on his crap and let the banter ensue! But there's also how much I love epic sweeping stories of good and evil with lots of political intrigue and conflicted characters. I  clearly have seriously been underestimating the influence of these movies on little Brandy.

How about you? What early favorite couples or experiences have influenced the stories you enjoy now?

Unknown said…
OH. MY. GOSH. BRANDY. I just had an epiphany reading your post. HAN AND LEIA. HAN AND LEIA ARE THE REASON I LOVED PRINCESS OF THORNS SO MUCH. THEY ARE MY LITERARY LUKE AND LEIA.

Brandy said…
Hmmm...I may need to reread Princess of Thorns. Maybe I wasn't in the right mood. I did like the interactions of the characters though so maybe it was just the rest of it that didn't wow me...