The Dark Lord: School's Out

December 01, 2014
Last year Bit read and fell in love with Dark Lord: The Early Years by Jamie Thomson. She highly recommended it, but I kept putting it off as new books came in to read. When the sequel, Dark Lord: School's Out, was nominated for the Cybils I decided it was the perfect time to try the series. I'm happy to say that it is amusing and you can start with the second book and still know what is going on. 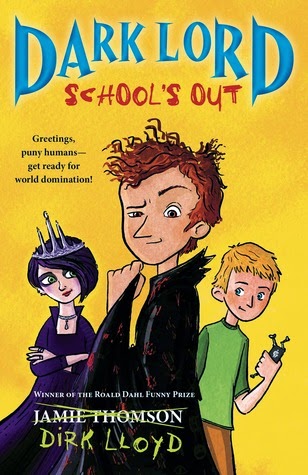 Dirk Lloyd is a Dark Lord trapped in the body of a middle school boy, his evilness diminished, and exiled from his home. When his attempt to return to the Darklands goes wrong and his friend Sooz ends up there instead, Dirk must work extra hard with the help of his foster brother Christopher to bring her back. Many obstacles stand in his path including being stalked by minions of the White Wizard who want to destroy him for good. In the meantime, Sooz wins the loyalty of Dirk's minions thanks to his ring which she now possesses. The minions assumes they are engaged. Soon she also wins their devotion as she makes changes that improve life for all in the Darklands. But the Hasdraban the White is not so easily defeated, and soon takes Sooz captive. Now Dirk must risk everything to rescue Sooz and reclaim his land. But will returning to the Darklands turn Dirk back into a true monster?

This book is super fun. It is brimming with kid appeal. It's not exactly my type of humor, but it does what it sets out to do well. The characters are what particularly appealed to me. It is an interesting look at stereotypes and the assumptions we make about people due to our preconceived notions. There is also the interesting question of people working to meet that preconceived notion or forging their own path. Sooz likes Goth and the idea of vampires, but is in no danger of succumbing to the nonsense that vampires are good in reality. Dirk is more complex. In many ways his living in human boy form has changed him. He has had to rely on others. He has had to help others in return. This has caused him to forge bonds of loyalty and friendship even though the is loathe to admit it. Watching him fight between these feelings and the person he always was in the Darklands, is fascinating. I am interested in seeing where Thomson takes these ideas in further books.

The book is a quick read and moves forward quickly. For the most part this works, but the end is a bit abrupt and feels like its missing a key scene. Mostly I liked the quick pacing though.

For kids who like fantasy and fun humorous books, this is a perfect pick.

Kim Aippersbach said…
I keep hearing about this series and thinking I would probably really enjoy it. (Also, the title reminds me of The Dark Lord of Derkholm, by Diana Wynne Jones, which I love, so that probably unconsciously influences me to want to read it!)
December 5, 2014 at 3:10 AM

Brandy said…
It has the same satirical approach as Derkholm, but from a different angle. Nothing can beat Derkholm for satire on epic fantasy though. Nothing.
December 5, 2014 at 4:02 PM