December 08, 2014
It is sad that Space Case by Stuart Gibbs didn't get a better  cover. I can seeing it getting skipped over without a second glance, and that would just be sad because it is actually a fun science-ficition murder mystery. 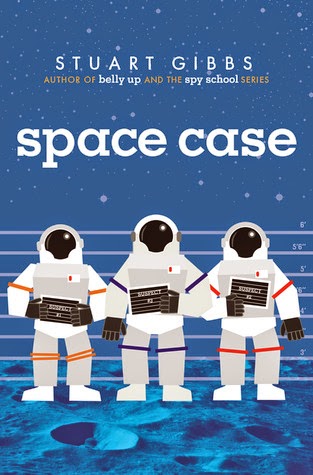 Dash Gibson is a "Moonie" one of the first residences on the moon. His parents are both scientists working on the space station there. The government lured their family there with promises of adventure and historic fame. They would be pioneers. Dash feels hoodwinked. Life on the moon is not nearly as exciting as it sounds, and is uncomfortable to boot. Dash wants nothing more than to return to his life in Hawaii. He misses his friends, the ocean, having toilets that flush normally, and fresh food. But things in the space station become more interesting when the resident doctor dies while on an unauthorized moonwalk. Dash immediately suspects foul play. He overheard a conversation the doctor had the night before where he was excited to reveal a recent discovery. Dash's concerns are smoothed over and he is told to keep quiet until a mysterious security official approaches him in secret and asks for help investigating. Soon Dash is convinced he's right about the doctor's death being murder. Unfortunately Dash's investigations have attracted to notice of exactly the wrong person.

This is an interesting sci-fi twist on the murder mystery at a house party story. The inhabitants of the space station are trapped. There is nowhere for them to go. A murderer on the loose is definitely not a comforting though. This is why so many people want to silence Dash. The actual investigation is one I found to be highly probable. I can see the Dash and his friends being able to do the things they did in this story and follow the clues to their outcome. I also felt that the scientific aspects were well done and what I imagine would be possible in the not too distant future. I liked how sterile and uncomfortable life on the moon was because that's also realistic.

Dash is a great hero. He is smart, sarcastic, and willing to take risks. At the same time, he is a typical kid, one who is just learning that he doesn't always want to go along with what the adults have to say. He has a quiet rebellion beginning to stir in him that the target audience for this book will be able to identify with. As a result of living on the moon, he does have a fair amount of independence and maturity, but his parents are very much all up in his business all the time. Typically in stories like this, parents are conveniently shuffled to the side. Not so in this book. Dash is tripping over his constantly. I liked that. We are seeing more involved and engaged parents show up in MG speculative fiction and that's a trend that needs to continue. Dash's closest ally in his investigations is a newcomer his age named Kira. She is the perfect foil for Dash. Adventurous, a boundary pusher, definitely not tripping over her father at every turn, she is a lot of things Dash isn't and they balance each other well.

I do hope that there are going to be more of these. Good murder mysteries for MG readers are a hard find, and this one is delightful.

Kim Aippersbach said…
There haven't been a lot of stories for kids about people on the moon, rather surprisingly. Your review reminded me of Monica Hughes' Earthdark, which I read when I was young. I like what you say about Space Case, and I agree that the cover doesn't seem to appeal to the right audience for this book.
December 8, 2014 at 3:30 PM

Brandy said…
I've never hear of that book. I'll have to check it out.

This cover needs help. Covers make such a difference in selling kids on a book. Great teachers/librarians can get a kid to read a book with a terrible cover with an excellent book talk, but you can't book talk every book.
December 9, 2014 at 8:51 PM