January 12, 2015
Love, Lucy by April Lindner is a book I was equal parts nervous and excited about reading. I heard good things about Lindner's first two novel retellings (though I never read them as I don't like the original novels). Love, Lucy however, is a retelling of a novel I do like, A Room with a View. While I always am excited about reworkings of old favorites, I'm also wary because reworking a classic into a modern tale is not as easy as it sounds. It isn't just about transferring a story into the present. I think Love, Lucy does the reworking part well. It may fall short in some areas for readers who have never read A Room with a View though.

Note on cover: Who is that girl???? That is not how Lucy is described in the book. 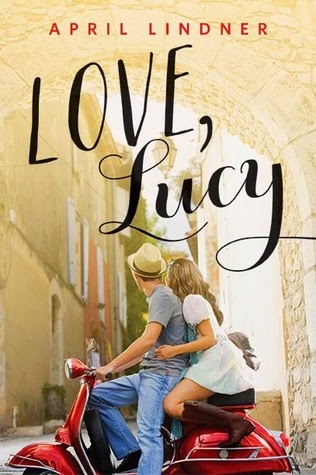 Lucy Sommersworth is on a backpacking tour of Europe following her senior year of high school. This is the trip she got from her father for her agreement to give up acting and major in business. The part of the trip Lucy is most excited about is Italy. Upon arriving in Florence, Lucy meets Jesse, an American boy who travels, busks, and works odd jobs wherever he ends up. Lucy and Jesse have an almost instant connection and their relationship grows quickly as he shows her around Florence and then they travel together to Rome. But Rome is the end of Lucy's trip and soon she is back in the US at her new college with a heart that misses both Jesse and theater. Lucy is determined to get on with her life though and begins dating someone new. She also defies her father and auditions for a part in the musical Rent. When Jesse shows up unexpectedly and her father demands she quit the play or he won't pay her tuition, Lucy has some serious decisions to make about who she is and what she wants out of life. Does she go the safe route or risk everything for what she truly wants?

Lucy's story is one that anyone can relate to. She is caught in that place where she is still learning who she is and what she wants to do with that. Her father wants her to follow the path he thinks is best, but Lucy's talents and passion don't fit that plan. She grows and changes as the story unfolds: finding her voice, making mistakes, learning to atone, and finding happiness. This doesn't come without its share of drama.

The first half of Lucy's story is a fun travel book which paints a beautiful picture of Florence and Rome with nods to both Forrester's original novel and the movie Roman Holiday. In this section Lucy is learning how to state her own opinions and desires and go after what she wants. Her relationship with Jesse develops at a fast pace, but in a realistic way that didn't leave me disbelieving its genuineness. Jesse himself is not that nuanced of a character. He's charming. He's fun. He's artistic. It's easy to see how Lucy falls for him. There isn't much more to him than that. As a fun travel story, this part of the book excels.

The second half of the story takes place at Lucy's new school (Forsythe) and is filled with quite a bit more angst and drama. Lucy misses Jesse. His emails are rare and she soon figures he's moved on. When an email she writes him comes back saying his address is invalid, she knows its time to move on. She is dating someone else and working on her role as Maureen in Rent when Jesse shows back up in her life. This whole section finds Lucy making some less than wise decisions that hurt more than one person, including herself. Lucy learns much about who she is and what she wants, but it's not a pain free journey. When is it ever?

The trickiest part about a modern retelling that's original relies so much on the importance of marriage in a girl's life is translating that idea into modern terms. I think Lindner does that well. Lucy's struggle is more about choosing between the safe business road her father wants her to take, and the more artistic route she is more comfortable with. The two romantic interests in this book reflect that struggle. One boy is safe. The other boy is an adventure. One boy has a lot in common with her own struggle with her father. The other is more rebellious and wants to make his own rules. In cutting down the cast of characters and recreating the most crucial elements of the plot, Lindner does credit to A Room with a View. (I do prefer the original novel.)

For those who haven't read A Room with a View, this book may seem high on the romantic angst and low on actual character development. Even Lucy is rather shallowly developed at points. I think there is a chance that this book will be compared to Gayle Forman's Just One Day more than it will the original work it is imitating. There are many similarities between this and Forman's book, and I feel Forman handles the same themes and character development better. However, Love, Lucy has its own charm too. I enjoyed the time I spent reading it and will certainly pick up more of Lindner's work in the future.

Love, Lucy is a fun read for those who like stories of travel and romance.

I read an e-galley made available by the publisher, Poppy, via Edelweiss. Love Lucy goes on sale January 27th.