January 22, 2015
Moonpenny Island by Tricia Springstubb is a book about family and friendship that is perfect for MG readers who enjoy quiet introspective reads. 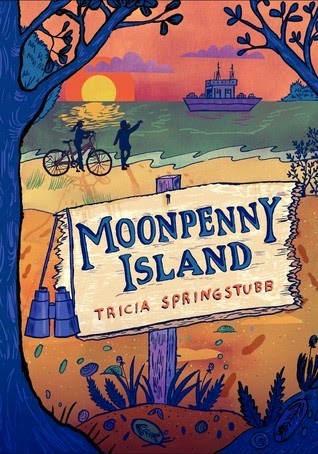 Flor and Sylvie have lived on Moonpenny Island all of their lives and are the best of friends. Living on a small island in the middle of a great lake, the girls are really each other's only option for friends. The summer people come and they go and there are not that many island residences. But they have a deep and strong friendship bonded by more than just convenience. Everything is about to change for the girls as Sylvie is being sent to the mainland to live with her aunt and uncle so she has better opportunities at school. Flor is devastated. Before her world can right itself, Flor's mother then leaves to help take care of her sick mother. But is that just an excuse? Flor knows how bad things are between her parents. They are always fighting. Flor is determined nothing else in her world will change and focuses on keeping her teenage sister, who is acting odd, from doing anything stupid and leaving too. In the midst of all this turmoil, a geologist and his daughter come to the island and Flor discovers that it is possible to allow for new and different people into her heart and life.

Flor's story is one that many MG readers will be able to identify it. Despite the almost magical setting of the small island which most readers won't relate to, the other aspects of the story are universal. Flor's search for stability and her fierce opposition to change despite it being the best thing for those involved is one that will resonate. Readers who have ever feared their parents' separating or have experienced it will find much in this book to identify with. Anyone who has ever lost a friend to a move will likewise be able to understand and feel Flor's pain. I enjoyed the developing friendships Flor discovers once Sylvie leaves and the community of the small island. I think that Springstubb did a great job bringing all the characters to life and making the island feel real. I particularly enjoyed the the tension and relationship between Sylvie's older brother and everyone else on the island. There was a lot of nuance and depth to that whole storyline that is incredibly well done. Exactly enough to show the complexities of it, but without so much detail that it will confuse young readers.

Moonpenny Island is fairly typical realistic MG fiction. It's about a bookish girl who has to come to terms with changes in her family and friendships. It will be a familiar set-up to anyone who reads a lot in the category. There isn't really anything in it that will surprise those readers. but it may hit exactly the right sort of mark because of this familiarity and predictability. There is comfort in the known. These books aren't exactly my favorites, but I recognize that those who love these sorts of books will also love this one. It is deserving of it. One quibble I have is in the narrative voice. The narration is third person, but it is so limited to Flor and sounds so much like her that it is easy to slip into believing it's first. It happened to me. Then the narrator would refer to Flor in third person and it was so disruptive that it pulled me out of the story every time. Eventually it really started to annoy me and had me convinced it would have been so much better in first person.

I read an e-galley provided by the publisher, Balzer & Bray, via Edelweiss. Moonpenny Island goes on sale February 10.