January 08, 2015
Last year's Biggest Flirts was the book that introduced me to Jennifer Echols. I've read a lot of her books this year and have come to the conclusion that she doesn't get nearly enough credit for how good she is. I've been continuously struck book after book by her characters' diverse voices and their genuine teen experiences that are as diverse as they are. Perfect Couple, the first of two 2015 releases by Echols and the second book in her Superlatives series, is actually my favorite yet. 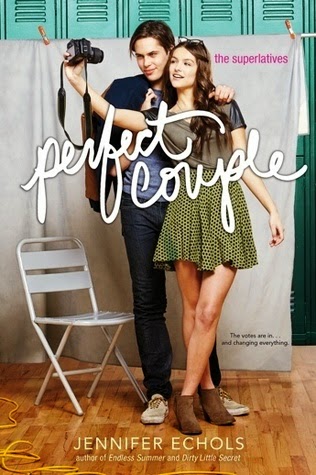 Harper is her yearbook's photographer. With dreams of going to art school and maybe being a photojournalist someday, she is focused on her future but has always given careful attention to her artistic side as well. She designs and makes her own clothes to fit a retro style she came up with all on her own. Her boyfriend is the kind of guy who fits her image. He is also artsy, enjoys indie films, and talks about social consciousness a lot. There is no great chemistry or romance between them, but she's different from her two best friends when it comes to relationships. Unlike Tia, she's never been interested in sex for the sake of good sex. It's never mattered. And unlike Kay, she hasn't had a long term serious relationship to capture her heart and attention. Harper is content in the invisible artistic bubble she's created for herself until the senior class votes her Perfect Couple That Never Was with gorgeous star football quarterback Brody. She thinks the senior class has lost its collective mind. But as the days pass and she gets more fed up with the superior attitude of her boyfriend, Harper begins to wonder if she's missing out on something, not just with Brody, but by allowing herself to be only one thing in the artistic niche she's created for herself. What would happen if she switched some things up a bit and made some different choices? It doesn't hurt that Brody is paying her attention and making her realize exactly what she's been missing out on when it comes to intense make-out sessions.

Harper is my favorite of Echols's heroines, which is a major reason this book is my favorite. I do find her more relatable than I have found some of the others, but more than that I just really like her vulnerability and curiosity. Senior year is a tough time for some, and Harper is one who begins to wonder about who she is and whether or not that is who she wants to be. As Harper begins to question why she has made some of the choices she's made, she makes some conscious decisions to change some stuff about herself. She does start dressing a little more like her peers and wearing contacts. Some of this is because she wants Brody's attention, but it's also combined with her frustration with herself and where her life currently is. I liked the complexity of this. One could argue Harper is changing herself for a boy and she should know better, but it's far more nuanced than that. Also real as teenage girls have been known to dress a certain way to attract the attention of a boy. Adult women do it too. What I really like is that Harper maintains a firm hold on the basics of who she is even as she questions some of her decisions in life. She makes some mistakes over the course of the story, but they are understandable ones and she works hard to correct them as quickly as she can.

As Harper is my favorite Echols heroine, Brody is definitely my favorite hero to date. He is an interesting mix of confidence and vulnerability. He's an amazing friend as is evidenced by his never wavering support of his best friend Noah who has recently come out as gay. Even though this book is first person from Harper's point of view, some of my favorite moments were watching Brody's interactions with Noah, Sawyer, and Will. I think one of Echols's real strengths is being able to write boys who make great romantic heroes but are still genuine teens and behave as such. I also loved how Brody's attraction to Harper transcends her "look". He thought she was hot whichever way she dressed. It wasn't her change of attire that caught his attention. It was the superlative announcement and her noted interest. Together they are great. I enjoyed their friendship, banter, and they way they worked through the hurdles in their way to a good relationship.

Another aspect of Perfect Couple I thoroughly enjoyed was the seeing more of the friendship between Tia, Harper, and Kay. This was part of Biggest Flirts too, but I feel like their connection and the reason for it was more fleshed out and fluid in this book than in the first. I love how strongly these three have each others' backs despite how very different they all are. It is so nice to see girls in YA romance have strong friendships.

The little glimpses of Tia and Will are a nice little addition for those who have read Biggest Flirts,  but you don't need to read that book to love this one. The building of the drama between Kay and Sawyer in this book was well done too. There is just enough there to set up the tension for Most Likely to Succeed (coming out in September), but not so much that it ever overshadows Harper and Brody. I have to say I can not wait to read that one though and I really wish the series would continue after their story. I really like this group of friends.

Content Heads-Up: references to underage alcohol use, some strong language, discussion of sex, some steamy make out scenes

I read an e-galley made available by the publisher, Simon Pulse, via Edelweiss. Perfect Couple goes on sale January 13th.

Kim Aippersbach said…
I don't tend to pick up books with covers like this one, but you've made the story sound really good!
January 9, 2015 at 1:38 AM

Brandy said…
It is. There are a lot of depths to the story and characters that you might not expect just going by the cover.
January 11, 2015 at 5:08 PM