January 28, 2015
The Unnaturalists by Tiffany Trent is one of those books that sat on my TBR for a long while that I wished I had read sooner. It is a creative look at a parallel world and such a fun story.

Vespa Nyx loves working on the exhibits in The Museum of Unnatural History where her father is the curator. Unlike most girls her age, Vespa is not at all concerned about making a good marriage. She wants to be a Pendant and study the world around her and all the Unnaturals she can find. There hasn't been a female Pendant since the first Emporer's daughter, Athena, and she is not remembered well. In addition to being a Pendant she was also a witch. She was executed. When Vespa discovers that she too has powerful magic, her entire world is turned upside down and everything she thought she believed in shattered. 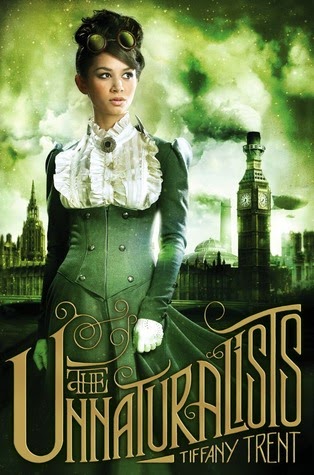 In the rail yards on the outskirts of New London, Syrus Reed lives with his family of Tinkers. Closely bound to the magic of the land, the Tinkers are shunned and looked down upon by the residents of New London. But when the Unnatural who is keeping the world's magic in balance demands Syrus bring her a witch, his search leads him to New London, Vespa, and a young man who is a member of a group bent on breaking the Empire's tyranny on the Unnaturals and the world. The three must band together and their choices may save-or break-the world.

The Unnaturalists is told in alternating first and third person perspectives. The first person is from the point of view of Vespa and the third follows the adventures of Syrus. I enjoyed both of them as characters. Vespa is very much trapped by the constraints of her society and the expectations of others, but I like how she managed to work her own will within those restraints. She knows she wants something different than the life planned for her, but also recognizes this is not a part of her reality. She tries to adjust as much as she can, but as her magic begins to make itself known, she is imperiled and has to make rather difficult decisions with little guidance. Syrus is also a wonderful character. A few years younger than Vespa, he is more impetuous. He is also angry. Angry at what is being done to his world and what has happened to his family. These traits cause him to run into a lot of trouble, but he is wily and capable. Vespa and Syrus do not get off to a great start as he steals form her on their first meeting. Eventually the learn to work together and respect each other though, bound together by their mutual respect and friendship with a mysterious wizard who is acting as a Pendant at the museum. (Honestly, Bayne aka. Hal is my favorite character and I would have really liked it if we had some chapters form his perspective too.)

The world Trent created in The Unnatrualists is a fascinating one in which people traveled from our world into a parallel realm of magic led by Tesla through a portal. Here they recreated much of what they left behind and built up a strict religion around science. All magic is heresy. The original Emperor enslaved the world's magic in order to make himself immortal. Not an original concept of villainy as far as fantasy goes, but that is actually only a small step to explain how the magical forces came under the tyrannical rule of the government. Through her world Trent explores themes of fanaticism, propaganda, the plight and exploitation of the marginalized, and the corrosive power of manufactured fear. She does all this while maintaining a quick pace. The book is hard to put down and is such a fun read. I'm very much looking forward to reading the sequel,  The Tinker King.

The Unnatrualists is considered YA and is shelved in the Teen section of my library, but is a book perfect for older MG readers too. (My daughter is reading it now.)