A Little Taste of Poison

October 03, 2016
R.J. Anderson is an auto-buy author for me (and also a friend), but her Uncommon Magic books may be absolute favorite. A Little Taste of Poison is the follow-up to last year's A Pocket Full of Murder. It is the perfect follow-up and surpassed all the expectations I had. 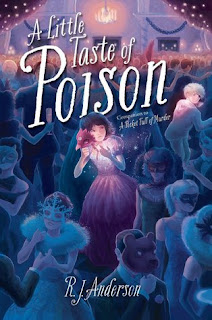 Isaveth has an amazing opportunity to attend Tarreton College on a scholarship and be trained in Sage  Magic. This is not something any commoner, never mind a Moshite, has ever done. Isaveth grasps the opportunity though she know it will be difficult. Yet it would also give Isaveth a chance to see Esmond again. They have not seen each other since freeing her father from the false murder charges against him. Both Isaveth and Esmond are eager to have the true mastermind of the crime brought to justice, but he is always two steps ahead of them.

It's always hard to write reviews to sequels without any spoilers of the first book. I attempt it as much as possible but can never avoid it altogether. If you haven't read A Pocket Full of Murder, read that first and then come back here.

Isaveth and Esmond are such an incredible team and magnificent characters. Both of them are developed more in this story. In A Pocket Full of Murder Esmond was in Isaveth's world for the most part, and this time that is switched around. We also see Esmond's family more. This switch works incredibly well and, taken with the first book, it rounds both of their characters out incredibly well. As a result of the revelations of book one, Isaveth and Esmond also have to renegotiate how they react to and deal with each other. They still can not spend time together openly which makes things challenging. Isaveth feels awkward as the Esmond she sees in public is so very different from the boy she came to know and care for in his disguise as Quiz. Another change in this book is that we see Esmond's family interactions and theses are fascinating and insightful as well as a minefield of intrigue and smart people trying to outsmart each other. It's brilliant.

There are several familiar secondary characters who return and it feels like seeing old friends. I particularly enjoyed seeing Isaveth's sisters again. Several new characters are introduced as well. Isaveth has new enemies waiting for her when she arrives at school, but she makes new friends too including Eulalie, the vivacious daughter of an important law enforcement official. Isaveth and Esmond had to do so much alone in the first book, it is wonderful to see them have more people they can rely on. It enriches both of their characters so much. Seeing what this brings out in Esmond,  who is not used to being able to rely on anyone else, is great. I can't tell you who my favorite secondary character is because of spoilers but know you're in for a treat!

The mystery in this book is even better than the first one. (And that's saying a lot.)  The book is impossible to put down and fast paced. There are so many twists and turns and surprises, each one of them more delightful than the last. And it continues that way to the very last page. I was squealing with delight and happiness at the end of the story and then nearly fell off the couch after reading the Epilogue.

Read the book. Read both the books. You'll thank me.

Kim Aippersbach said…
My library still doesn't have Pocket Full of Murder. I think I might just have to buy it—you are rather convincing about the merits of these books!
October 10, 2016 at 5:30 PM