A Song for Bijou

February 04, 2013
I found A Song for Bijou by Josh Farrar one day on NetGalley and was immediately intrigued. I had not heard about it prior to that and after reading the synopsis I knew I had to read it. A contemporary book about a Brooklyn boy who falls for a newly arrived Haitian immigrant? We don't get many of those and I am happy to say that it is a good one. 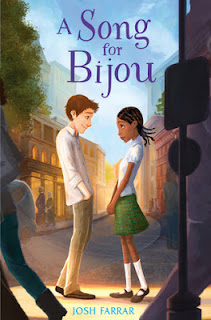 Synopsis (from Goodreads):
Life for Alex Schrader has never involved girls. He goes to an all-boys prep school and spends most of his time goofing around with his friends. But all that changes the first time he meets Bijou Doucet, a Haitian girl recently relocated to Brooklyn after the earthquake-and he is determined to win her heart. For Bijou, change is the only constant, and she's surprised every day by how different life is in America, especially when a boy asks her out. Alex quickly learns that there are rules when it comes to girls-both in Haitian culture and with his own friends. And Bijou soon learns that she doesn't have to let go of her roots to find joy in her new life.

There are so many books that focus on boy-crazy girls. We don't get nearly enough that focus on girl-crazy boys. And those boys are out there. Oh believe me are they ever. Alex sounds like a few of the boys I taught. I loved that. I loved the genuineness of his voice and the interactions with his friends. He is a nice guy but a painfully shy one and the way he deals with this is fun to read. Bijou's character felt slightly more forced, but only slightly. She is more mature in her thinking. She has been through  a lot so that is understandable. I found her struggle to maintain who she has always been and at the same time fit into her new world a heart-wrenching one. The rules in her family will seem crazy insane to modern American readers, and she chafes under them as well. Through Bijou and her family we get a picture of the modern immigration struggle of one small community and it is fascinating. The story switches back and forth between Alex and Bijou's points of view. I liked that their names weren't tacked on the beginning of their chapters. They didn't need to be. I knew after only a few words whose point of view it was. Their voices are that distinctive.

The plot focuses on the budding relationship between Alex and Bijou as he tries (sometimes disastrously) to get to know her and she slowly lets him. Everything about the two of them is spot on middle school crush. It's perfect. As a result of this Alex, and with him the reader, get a fascinating window onto Haitian-American culture. The setting is so well rendered I felt like I was actually there. I was a little disappointed in some of the plot developments toward the end and felt that the drama there was unnecessary and detracted from what is otherwise a wonderfully written and engaging story. I'm pretty sure the target audience will love it though, and that's what matters. This is a book that will appeal to many students in grades 5-8.

I read a copy of A Song for Bijou from the publisher via NetGalley. It will be available for purchase on February 12.

Brandy said…
I hope he likes it. I haven't seen a lot of talk about this one, but there should be more. It is one of those books I wouldn't have been able to keep on my classroom library shelf.
February 5, 2013 at 3:50 PM