February 28, 2013
Man oh man can Jennifer Nielsen write a story that captures you and won't let you out of its grip until it's done. That was the case with last year's The False Prince (my thoughts) and its sequel, The Runaway King, has the same effect.

**Spoilers for The False Prince ahead. If you haven't read that one, read it, then come back and read this.** 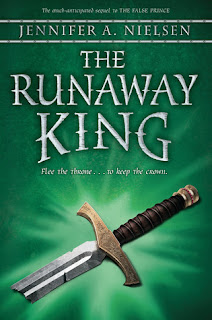 Synopsis (from Goodreads):
Just weeks after Jaron has taken the throne, an assassination attempt forces him into a deadly situation. Rumors of a coming war are winding their way between the castle walls, and Jaron feels the pressure quietly mounting within Carthya. Soon, it becomes clear that deserting the kingdom may be his only hope of saving it. But the further Jaron is forced to run from his identity, the more he wonders if it is possible to go too far. Will he ever be able to return home again? Or will he have to sacrifice his own life in order to save his kingdom?

The Runaway King starts fast and doesn't let up the entire time. The world of this second book is larger and the plot has more action. Reading it is rather like taking a ride on a roller coaster that occasionally jerks to a halt and drops you blind onto some unseen track. I loved that about it. This volume has assassins, thieves, and pirates. There is plenty of action and adventure, but it remains a story about Jaron and his quest to find his place in the best way he can. Jaron is figuring out what type of ruler he is going to be and exactly what is the best way to help his country. In Jaron Nielsen has created a character the reader can truly care about and root for. I sure do. This is problematic for the steadiness of my emotions as Jaron is as reckless as they come with his own safety. He acts on plans with little knowledge or assurance that they will come right, and often they only do due to a convenient twist in events.  Jaron is clever and tries to pave his own way but he is often left having to catch up with what he doesn't know about what others are doing and planning. I like the balance between the two as it is realistic. No one ever has all the answers. Though I did feel Jaron should have been more clued in and less shocked about the true colors of a certain character.

In addition to Jaron many of the other characters from the first novel return and I loved reading about all of them again. There are also some wonderful additions to the cast. I really like the way Nielsen creates all these characters that I care about and want to see succeed while keeping up such a fast paced plot at the same time. Again, there were a few events that were a little too convenient, a couple times when I had to suspend my credulity a bit or wonder how something could be truly possible. Those moments are greatly overshadowed by the fact that I love the story and all the people in it so much.

Warning: The end is going to make you want the next installment immediately.

I read a copy joyously received from the publisher via NetGalley. The Runaway King is on sale March 1.

Charlotte said…
I've just finished reading it, and drafted my own review, so now I can read yours! I'm glad I'm not alone in feeling that credulity was stretched--for me, sadly, it stretched too far and snapped. Oh well--I'm looking forward to the next book regardless....
March 3, 2013 at 5:56 PM

Brandy said…
I was more bothered by how clueless Jaron was at times. I wanted the boy to wake up and pay attention. I feel like he is smarter than this. Or was in the first book anyway.
March 3, 2013 at 7:20 PM