Jepp, who defied the Stars

February 15, 2013
Jepp, Who Defied the Stars by Katherine Marsh would not have been a high priority read for me were it not chosen to compete in this year's SLJ Battle of the Books. The premise intrigued me, but I probably would have waited until my library received a copy. BoBs prompted me to buy it and push it to the top of my TBR. I'm grateful for this because I LOVED it. (BoB, this more than makes up for making me buy Life: an Exploded Diagram last year.) 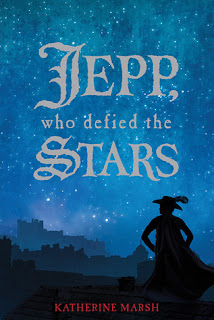 Fate: Is it written in the stars from the moment we are born?
Or is it a bendable thing that we can shape with our own hands?
Jepp of Astraveld needs to know.
He left his countryside home on the empty promise of a stranger, only to become a captive in a luxurious prison: Coudenberg Palace, the royal court of the Spanish Infanta. Nobody warned Jepp that as a court dwarf, daily injustices would become his seemingly unshakable fate. If the humiliations were his alone, perhaps he could endure them; but it breaks Jepp's heart to see his friend Lia suffer.
After Jepp and Lia attempt a daring escape from the palace, Jepp is imprisoned again, alone in a cage. Now, spirited across Europe in a kidnapper's carriage, Jepp fears where his unfortunate stars may lead him. But he can't even begin to imagine the brilliant and eccentric new master--a man devoted to uncovering the secrets of the stars--who awaits him. Or the girl who will help him mend his heart and unearth the long-buried secrets of his past.

Historical fiction. It attracts and repels me. I love it when it's done well, but it is so often done wrong that I am more than a little afraid to read it anymore.  Jepp, Who Defied the Stars is done right. Marsh brings 16th century Netherlands to vivid life in this story. The lives of the commoners, the court, academics, the pull between superstition and science, a world clinging to the past while on the brink of a new era is all wonderfully rendered. And at the center of this marvelous world is a dwarf by the name of Jepp.

Jepp's voice and character is the strongest factor of a novel that is full of strengths. As a reader I could relate to his plight even though I've never experienced anything like it. I felt sympathy for him. Most of all I wanted to see him succeed and find happiness. I wanted him to break free of his chains and live the life he could. Marsh truly makes him a real person, one you can feel for and love. As a result his story is a gripping one that I couldn't put it down even in its slower moments. (I read the whole thing in one glorious sitting.) The other characters have just as much life and depth as Jepp. Both antagonists were a little flat and predictable, but they serve their functions well.

I enjoyed how Marsh presented the pull between fate and free will. She brings up questions everyone struggles with at some point and arrives at the inevitable conclusion. Jepp's journey to this is one that will fascinate readers and that they can also identify with.

This is one of those books that doesn't fit nicely into any age classification. The bookstore I purchased it from had it shelved with the MG books. The protagonist is in his mid-late teens like most YA. The story is one I can see appealing to adult readers, even ones who don't normally enjoy "children's books". It is a great story whatever the age of the interested party who picks it up.