February 06, 2013
R.J. Anderson is a favorite of mine. I love everything she writes, whether it is fantasy about butt-kicking faeries or mind blowing science-fiction. And boy oh boy is her latest novel, Quicksilver, mind blowing. It will mess with your head in a way only the best books can. 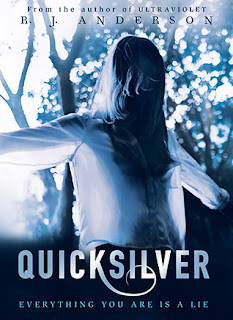 Synopsis (from Goodreads):
Back in her hometown, Tori Beaugrand had everything a teenaged girl could want—popularity, money, beauty. But she also had a secret. A secret that could change her life in an instant, or destroy it.
Now she’s left everything from her old life behind, including her real name and Alison, the one friend who truly understood her. She can’t escape who and what she is. But if she wants to have anything like a normal life, she has to blend in and hide her unusual... talents.
Plans change when the enigmatic Sebastian Faraday reappears and gives Tori some bad news: she hasn’t escaped her past. In fact, she’s attracted new interest in the form of an obsessed ex-cop turned investigator for a genetics lab.
She has one last shot at getting her enemies off her trail and winning the security and independence she’s always longed for. But saving herself will take every ounce of Tori’s incredible electronics and engineering skills—and even then, she may need to sacrifice more than she could possibly imagine if she wants to be free.

Tori aka. Niki is...just...there is really no one word that can fully embody her awesomeness. (Awesome is so overused. I can think of one acronym that would do her justice, but as I try to avoid using the words the acronym stands for I'll leave that to your own amazing brains to figure out my savvy readers.) She is an engineer with a brilliant scientific and mathematical mind. And the snark that goes with her frustration at not being taken seriously because she is a girl interested in the field makes the reader feel her frustration and want to demand justice for it. (And all the girls like her.) She is steadfast, loyal, and courageous. (I can not stress that last one enough.) Despite Tori's uniqueness and special talents she is still a character that any teenager, or anyone who has ever been a teenager, can identify with. Unlike the de rigueur in most sci-fi/fantasy YA Tori has amazing parents who are present and love her. She loves them back, but often finds herself appalled by them and somewhat mocking of them, at least in her own head. Which is extremely realistic. Take for example these exchanges:
"Who's that boy, honey?" she asked.
"Milo," I said. "You know, from work. He lives around here, so we got off the bus together."
"He's not bad looking," she mused. "For an Asian."
Oh, wow. And she was a pretty nice mom, for a racist.
And
"...So who's the lucky boy?"
Hello, Dad Cliche 32. Nice to know this conversation was still on a predictable course. "Milo Hwang," I said.
There was a fractional silence. Then Dad said, a little too heartily, "Well, good for you. That's...um, great. Hope it works out."
And there it was. Liberal on the outside, redneck conservative deep down. He wouldn't forbid me to see Milo because that would be narrow-minded, but that didn't mean he was ready to invite him over for hockey and popcorn.
Who hasn't experienced moments like this with their parents over SOME topic?

And this brings us to Milo who is also amazing and totally crush worthy. I challenge you to read this book and not find him to be prime crush material, even if Tori's feelings for him are not quite the expected romantic norm. This difference is a real strength to the story and characterization.  I really liked what Anderson did with their relationship, challenging the modern concept that it's all about sex. (It isn't.) Milo is just as fully realized a character as Tori and I can't really say more without spoiling things.

I'm not saying anything about the plot that the synopsis doesn't already tell you, because it is one of those books you have to experience. It is a companion to Ultraviolet (my thoughts), but you can read it without having read Ultraviolet. In fact, Anderson's brilliant-mind-messing writing will have you questioning things that you think you know even if you have read it. I will say I liked Quicksilver more, mostly because of how much I love both Tori and Milo. I also liked the alternative perspective on Sebastian that Tori gives us.

Anyone who loves a good story told by an amazing writer this book is for you. I can not wait until my official copy arrives so I can read it again.

I read a copy made available via NetGalley. Quicksilver's official release date is March 1, but you can currently order it through your local bookstore or Amazon.

Christina said…
Yay for the Milo love. He is marvelous.

I also agree with you about the snarking of the parental units. Of course, I didn't like their judgment of Milo, but, let's be honest, we all know people whose parents or grandparents are like that, despite the fact that they should know better by now.
February 6, 2013 at 3:04 PM

I like the realism of acknowledging that people can be good people but still have ugly prejudices. And Tori's reaction to this is so perfect.
February 6, 2013 at 3:59 PM